Our last full day on the Silk Road tour and what an action packed one it has been. We are in Dunhuang, a small town in the Gobi Desert and our first stop was the sand dunes. 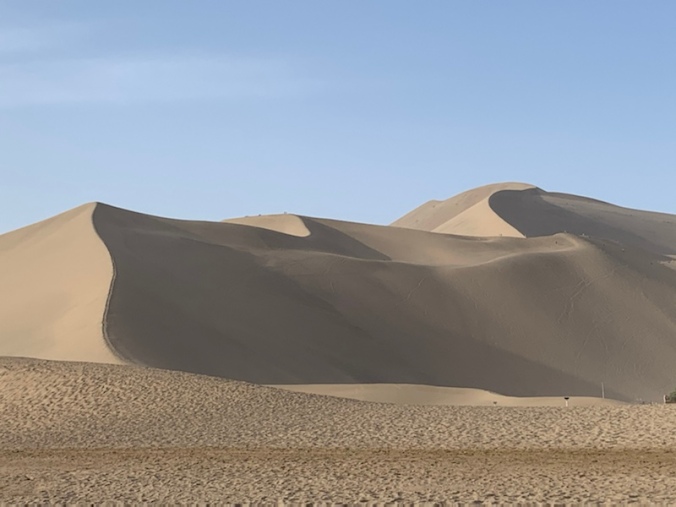 Once again this was a place so remote in my imagination that I never dreamt that I would ever set foot here. The sandscape was stunning but because we went early in the morning it wasn’t too hot. It was also fairly cloudy so we didn’t burn (luckily)

We had the choice of a optional camel ride and it just had to be done. It cost only £10 for an hour and a half! 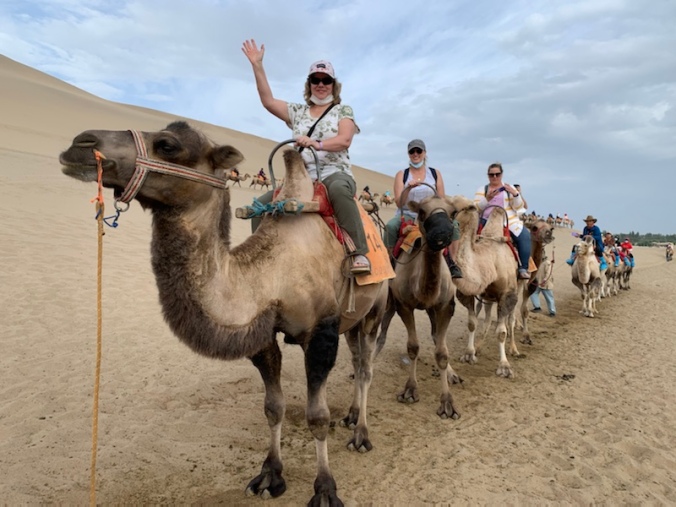 They put me on the lead camel and off we went. The camels were dromedaries which meant they were easy to ride as you sat between the humps. Obviously getting up and down was tricky as you had to lean right back but we soon got the hang of it. 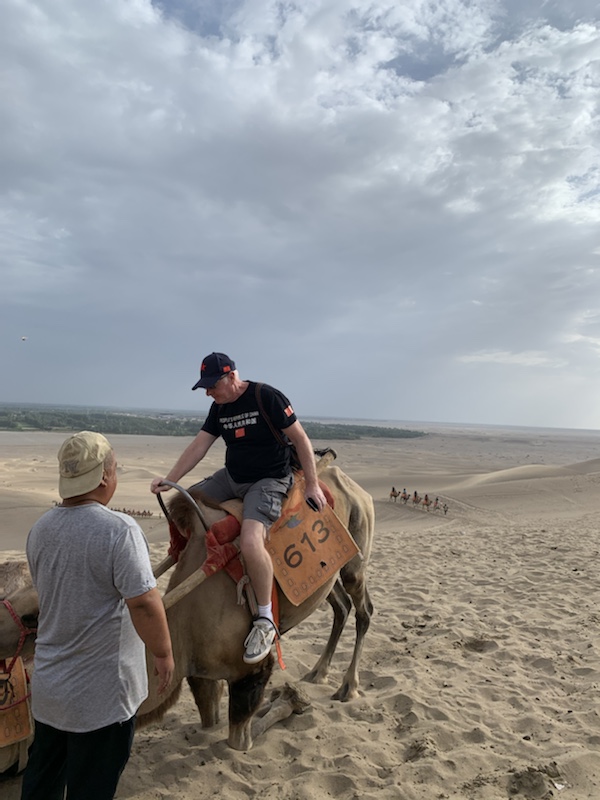 The four of us made our own little caravan and it was easy to imagine what it must have been like for those Silk merchants. 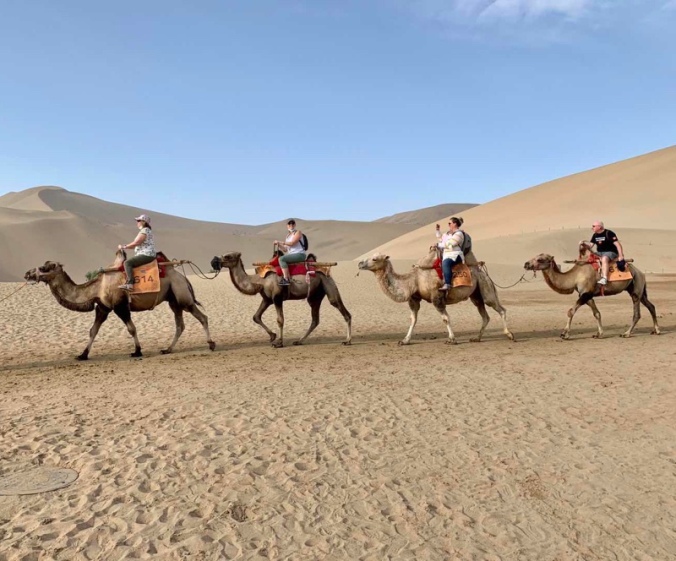 Apparently an average caravan would have approx 20 camels but of those 7 would be carrying the clothes and personal effects of the traders. Only 13 would have goods to trade. It was a lucrative but risky business as they were prone to ambush by local brigands. Just doing this tourist trip we had a real sense of how grueling the journey must have been but also how beautiful. 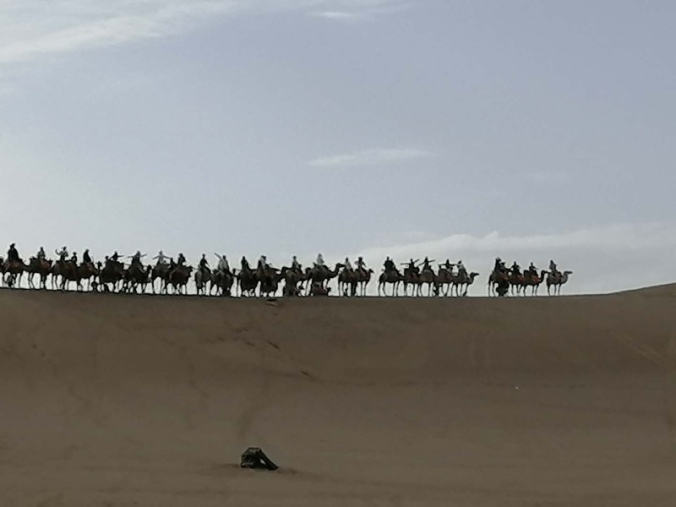 We were taken to a high dune and opted to climb it in order to get the best views. It cost an extra £2!

This was the ladder that we had to use. 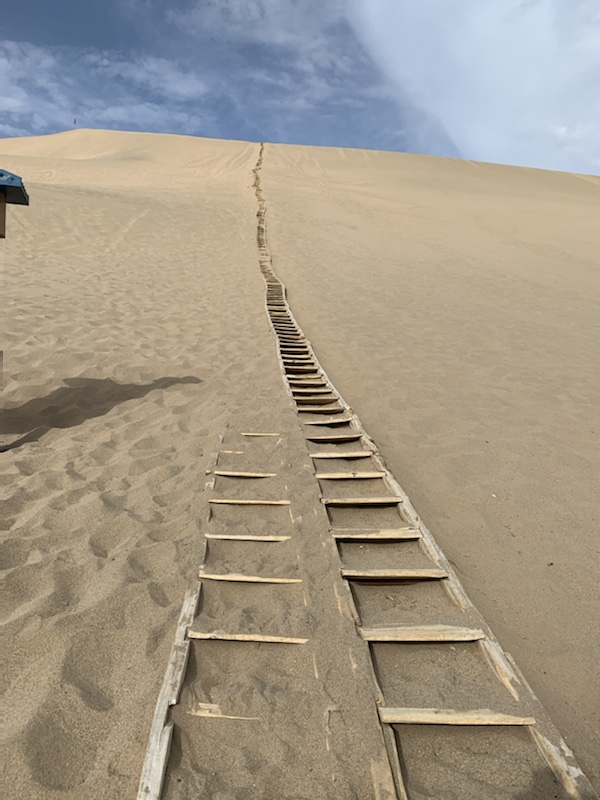 At least we had a ladder!!! But I have to say that towards the top it got pretty steep and each tread was filled choc a bloc with sand. As you can see it was also very narrow and I felt once or twice that I might lose my balance. It was slightly outside my comfort zone. But we made it.

The next problem was how to get down. There were more tourists coming up the ladder behind us so it wasn’t that way. It was this. 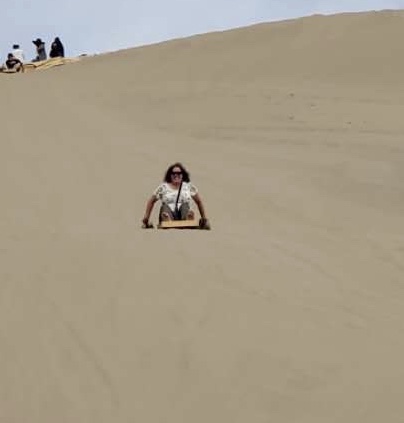 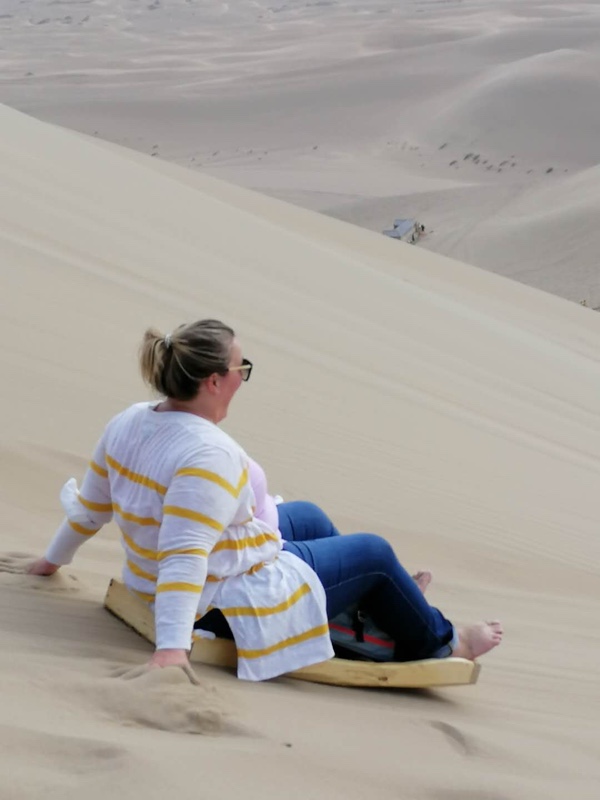 Oh boy that was exhilarating!

Then we walked to the other amazing natural feature of this location, the crescent lake. 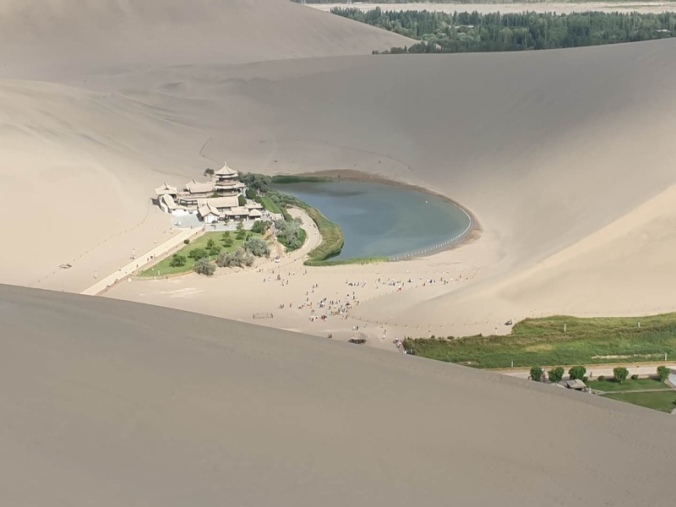 This picture is courtesy of one of the others in our group who did a dune walk instead of the camel ride. We didn’t get this high ourselves. Formed from a natural underground water source this is a superb scenic spot. It used to be much bigger but as the town of Dunhuang has grown and taken some of the water away the lake has shrunk. 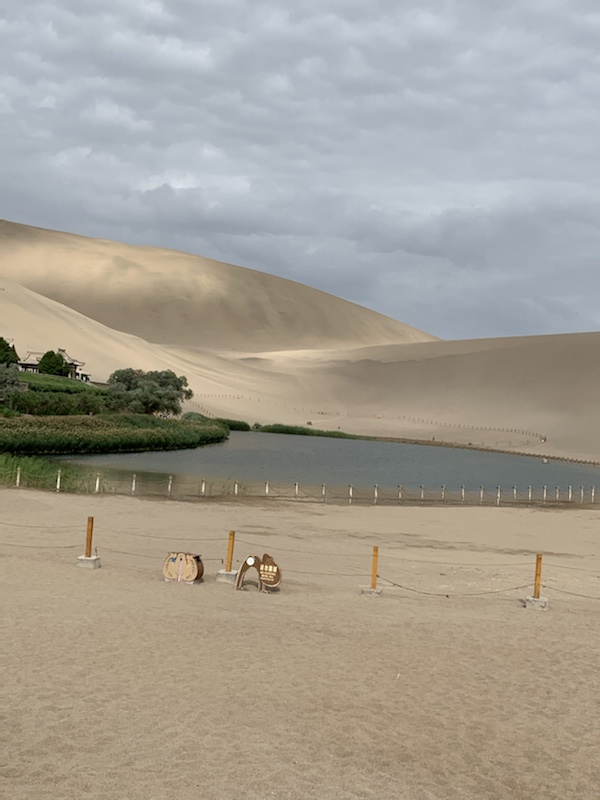 The temple beside it is new, the original having been destroyed in the cultural revolution. 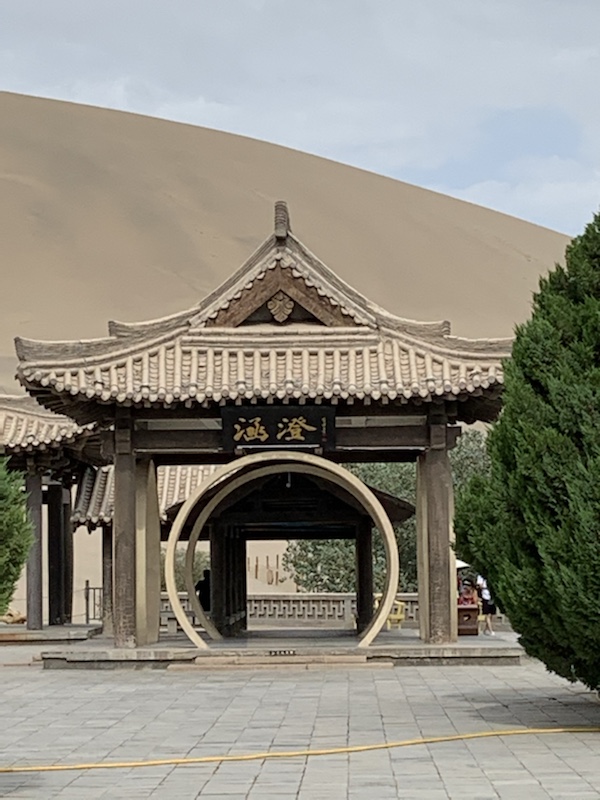 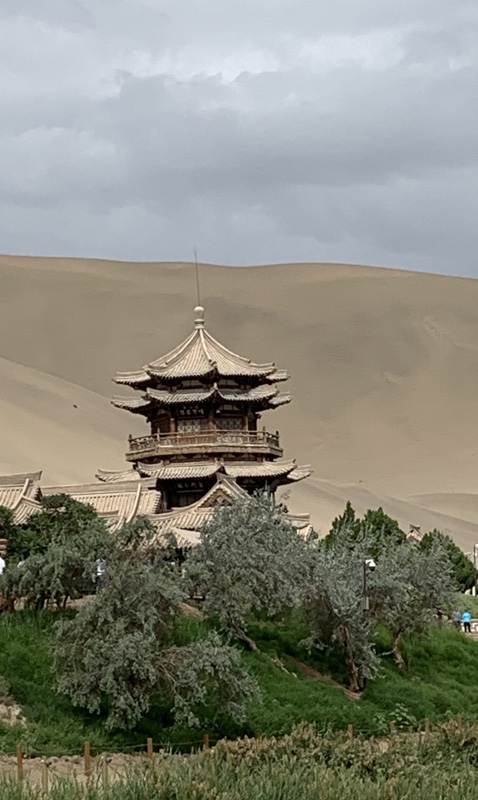 But these prayer tags show that spirituality is alive and well in this communist country. 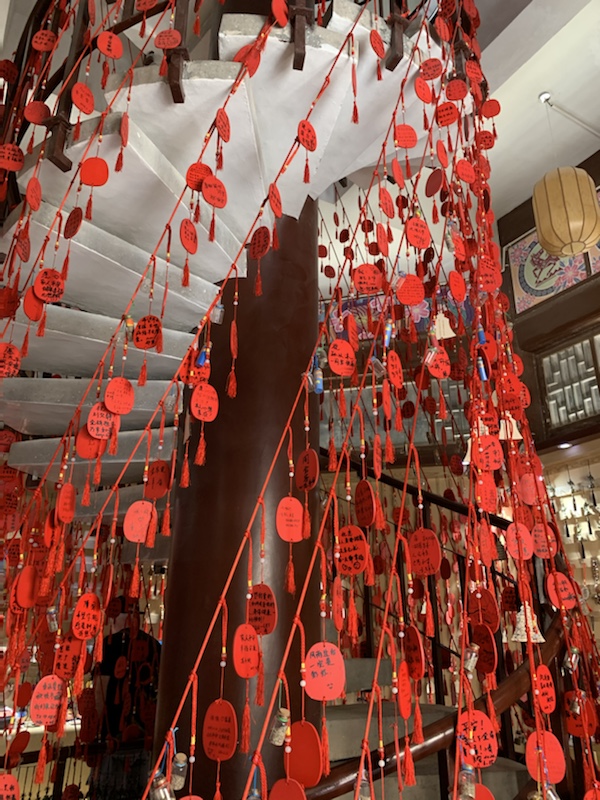 Then it was back to our hotel to wash the sand out of our hair and we were off again. If I am totally honest I could have just fallen asleep at that point. The fresh air and exercise was great but grueling at my advanced age!! There was to be no rest for us though as we had one final attraction to visit.

The Mogao grotto is a series of ancient Chinese Buddhist caves hewn into the rocks at the base of the sand dunes. Begun in 366 by a wandering Taoist monk who whilst traversing the dunes had a vision of 1000 Buddhas so he stopped and chipped away at the sandstone to make himself a little cave where he sat and meditated. This holy man attracted devotees and soon everyone wanted a cave. 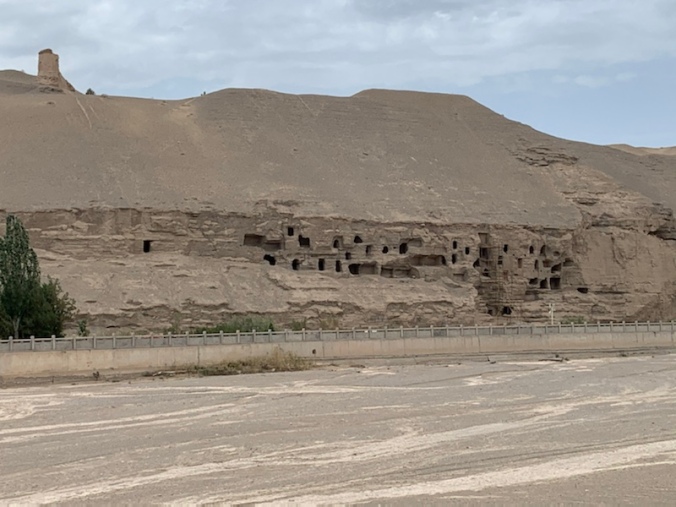 Altogether there are over 700 caves of varying sizes. Each has statues and wall paintings which have been remarkably well preserved. The picture here shows some of the caves where the monks and painters lived during construction. 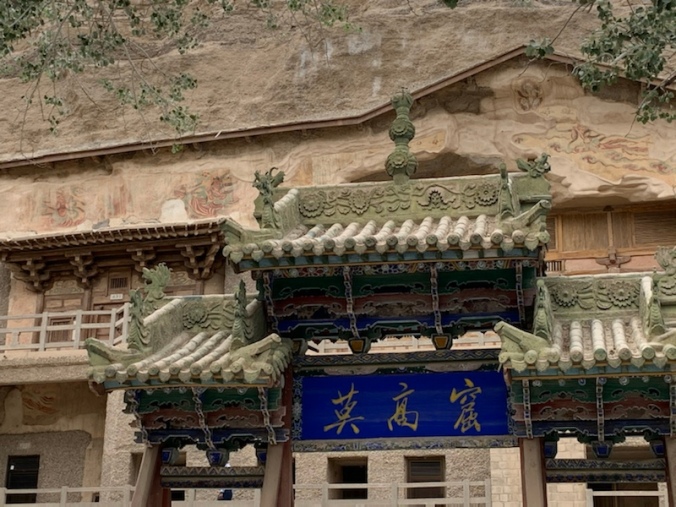 The Red Guard had been dispatched to destroy the ancient site but the then director was friendly with the local party president and he called in a favor and the guards were called away. Thank goodness.

The caves were cut out by individuals and families who saw their creation as ‘merit making’. Families would then make pilgrimages to their cave for special ceremonies or meditation. The wealthy families had large ornate caves like huge rooms but some poorer folks just had tiny ones. Like this. 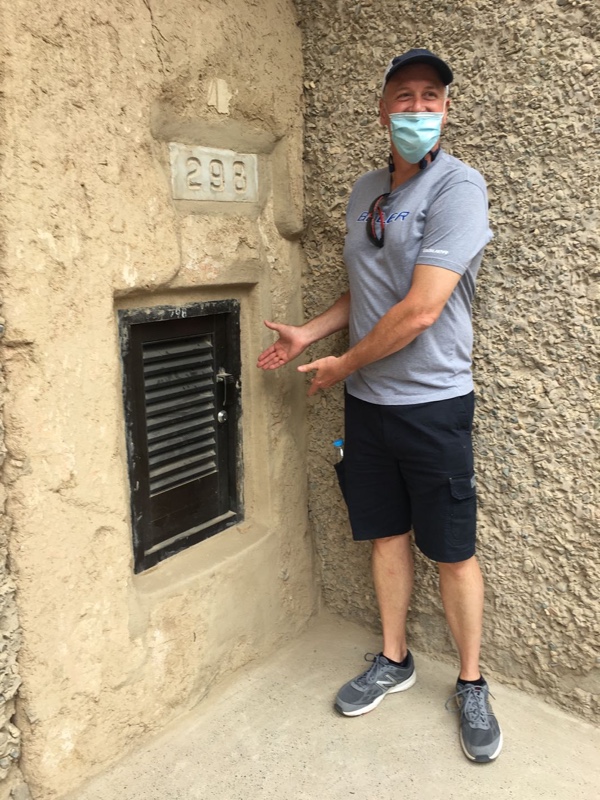 Cave construction lasted between the 4th -14th century then as shipping took over from the Silk Road as a preferred trade route the site became forgotten. The local government also moved residents into the fort at Jiayuguan behind then newest part of the Great Wall and away from these locations as that was deemed safer. It wasn’t until the early 20th century that a local farmer rediscovered them. Many had become buried in the shifting sands. He discovered one room with over 20,000 preserved silk paintings and Buddhist sutras (texts) and he tried to get help from local officials who basically ignored him. He met some European explorers who did believe him and who recognized the importance of these ancient treasures. However many of these artifacts are now in The British Museum, The Louvre and Harvard University!!! Very tactfully our guide said that they were ‘being preserved elsewhere in the world’

Only about 70 caves are open to the public nowadays and no photography was allowed inside.

Here are some images that I found online of what the paintings are like. Many date from the 7th century and retain their original colours. 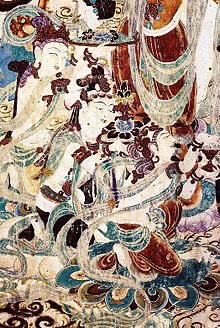 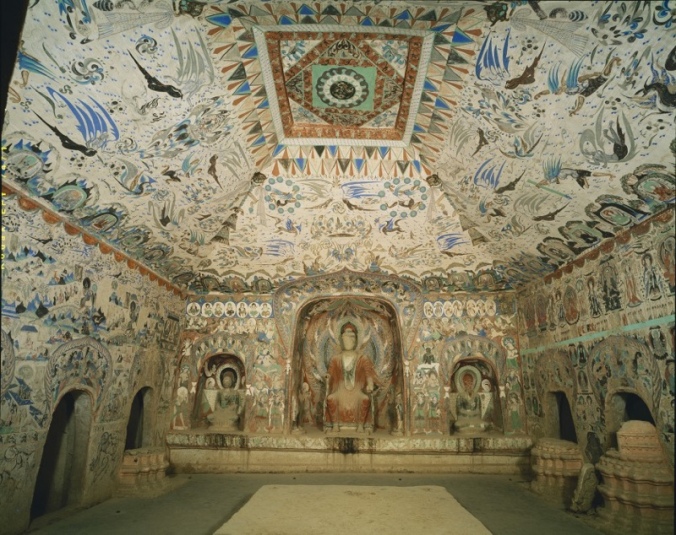 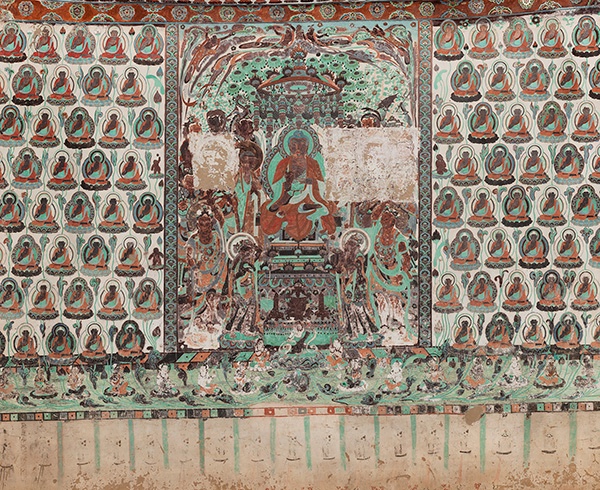 Each cave had a set of statues and paintings of 1000 Buddha images. 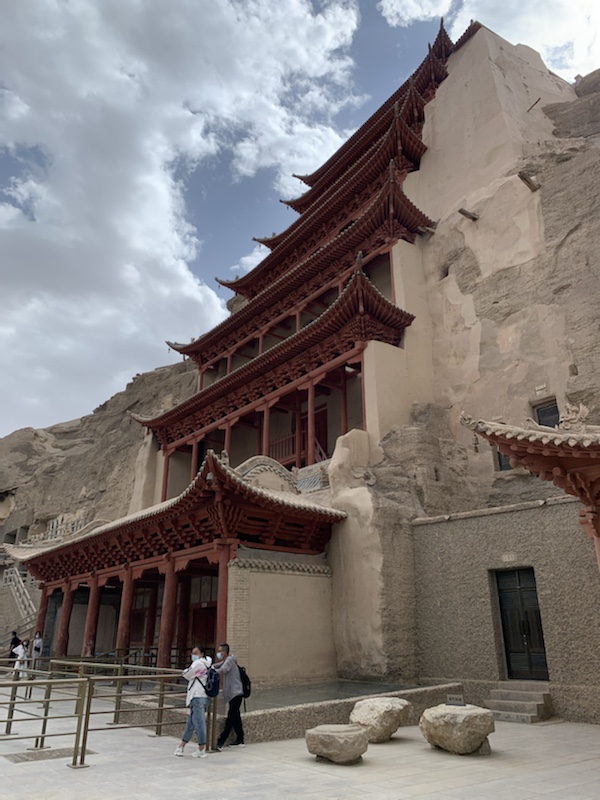 Inside was a giant seated Buddha statue 35 m tall. It looked a bit like this from the ground. 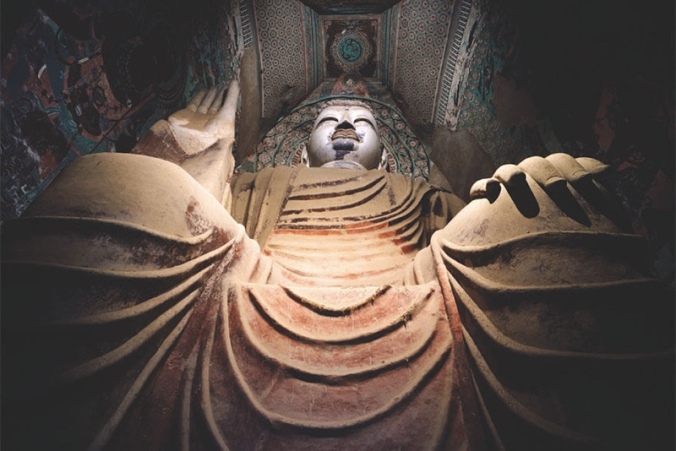 Originally there was no roof so his head poked out of the top!

That’s all for now. We are very tired as it has been all go with very little if any rest. We are off to an open air theatre production tonight which promises to be very good.

This has been a trip of a lifetime which we booked with only one week’s notice because we are stuck in China and can’t travel anywhere else. It has been quite an experience with so many different things each day and I am really glad that we have done it. I feel that I know a lot more about chinese culture, geography and history than I did before. Shanghai is so cosmopolitan that it has been described as ‘China-lite’ and Jinqiao, the suburb where we live is ‘Shanghai-lite’ so this excursion was an excellent way for us to see some of real China.

One thing I should say though is that we were subjected to intense scrutiny at every attraction along the way. We all have chinese SIM cards and apps and we not only had to produce our passports everywhere but also our green health code. Tourists from outside even if they were allowed in would not have access to all that. Our guide made sure that we arrived at each stop in time to complete the additional checks. Our group had enough mandarin to order a meal in a restaurant but nowhere near enough to have been able to navigate all the additional bureaucracy. We couldn’t have managed without our English speaking guide.