One of the ways that we are trying to adapt to our new surroundings is by learning a little of the language. THIS IS NOT EASY. The script isn’t the same and none of the words have any common roots from Latin so unlike other European languages nothing sounds like any words that we are in any way familiar with!!!

Courtesy of the school we had 5 free Thai lessons as group of new staff and now Kevin & I are having a few private lessons from one of my library assistants. This is only to gain a few simple words to use in everyday life such as:

Just to confuse you, that would be what I would say. As a female I end things with ‘Kaa’ (pronounced as if I had an extremely strong Lancashire accent!) Kevin ends phrases his with the male equivalent of ‘Krub’ sometimes written krup or even krab or krap!

Other essential phrases to learn have been:

Lod noy dai mai kaa? – will you give me a discount?

A recent but already much used phrase is:

Mai ben Rai Kaa (No thanks or no worries) which is said to the multitude of drivers who kerb crawl beside us shouting TAXI TAXI just because we are foreigners! Actually when we have said ‘Mai ben rai Kaa/krub’ they have loved it and smiled or clapped. The Thai are genuinely happy if someone makes an effort to learn their language.

The most important phrase of all is:

Huong Nam yuu tai mai? or Where are the toilets? Of course we only understand the response through gestures as we are still working on our directional vocabulary.

So far we have learned basic foods, colours and the numbers. Kevin decided to have a go the other day so tried to order two chicken sticks from a street vendor. Two is ‘song’. What he should have said was ‘Gai song’ but he actually said ‘Gao song’ which means 2 nines!! The woman looked at him a bit funny but gave him chicken anyway…

Thais also don’t have a ‘p’ sound. Some words have a ‘bp’ sound which is quite hard to master. 8 for instance is ‘Bpad’ – I am currently avoiding buying 8 of anything.

As you can see from the picture, Thai writing has no capital letters and no punctuation whatsoever. To my eye it resembles rows of knitting. The little squiggles above the main letter represents a tone. There are five tones in the Thai

These tones make the spoken language sound very musical and anyone with a musical ear can learn Thai much easier than those of us who haven’t got a clue!

The tones are actually very important as the sounds change the meaning of the word. I recently learned how to say the word for beautiful which is ‘Suay’, however I didn’t realise that you needed to rise at the end of the word ‘Suaaay’ because if you say ‘suay’ in a flat voice then it means ‘unfortunate or bad luck’ One has to be really careful when complimenting the hairdresser on the cut you have just had!!! Really careful…

There is an anecdote here of a former teacher who had been learning Thai and who wanted to do some research with one of the senior monks. So in Thai he said that he would like to do an interview which should take only about 30 minutes. The junior monks burst out laughing and explained that he had used the wrong tone. Instead of ‘interview’ he had actually said ‘I would like to fondle you gently and it will only take about 30 minutes’!!! You can see the pitfalls. Needless to say the request for the interview was not granted.

It is so gratifying when you can use a word or phrase just learned. Yesterday I was able to say to a taxi driver ‘Yud trong nee’ and he actually stopped right there. It worked!!! Yay. 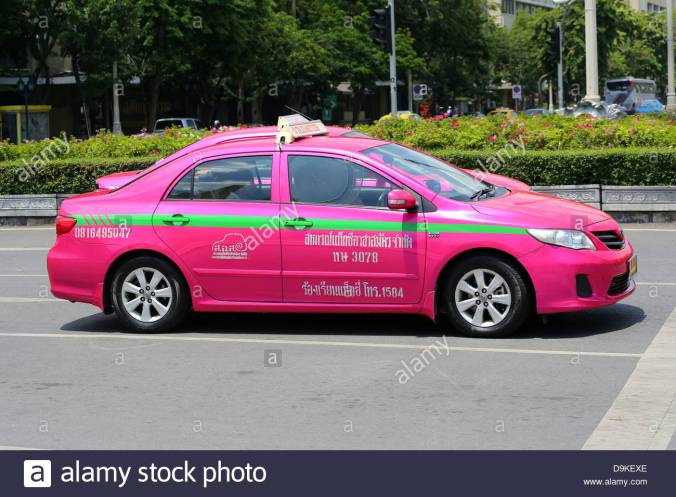 The only trouble now is remembering it all…

Loy means ‘to float’ and Krathong is the name of a basket. Thais make the Krathong (nowadays from biodegradable materials thankfully) and fill them with flowers. Sometimes small amounts of money are inside as an offering to the river spirits. The basket is topped by a candle and incense sticks which symbolise the Buddha. 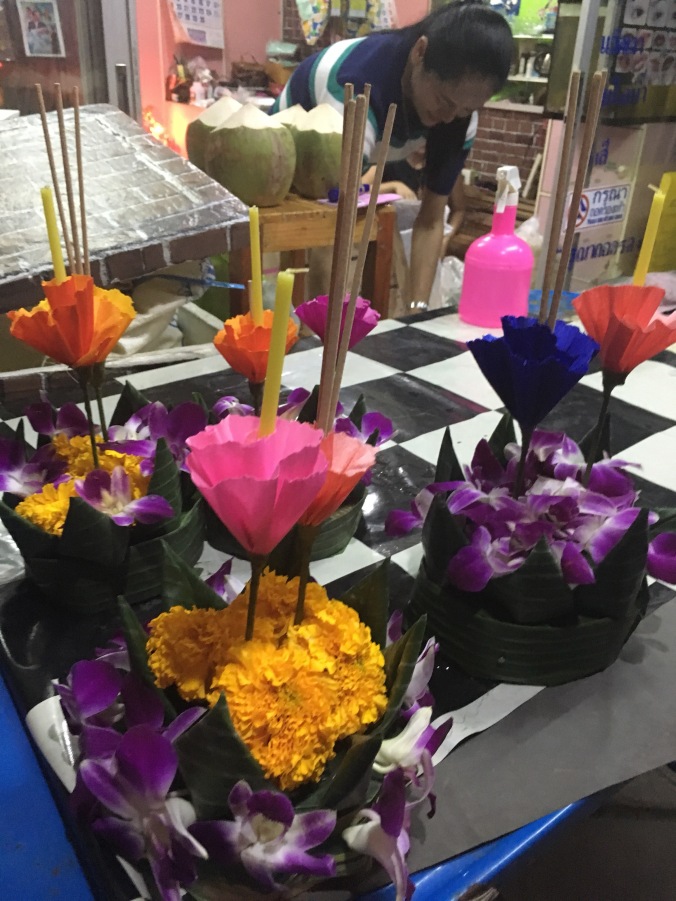 The Krathong are launched after sunset usually on rivers but also lakes and canals. We went down to Asiatique which is a local market on the riverside. It was obviously a popular place as hundreds were there. Because the tide was low the Krathong at our spot were lowered into the river on poles. Unfortunately it was a bit windy so lots of them capsized almost immediately! The candles didn’t stay lit either.

You can imagine what a spectacle it must be on a calm evening. 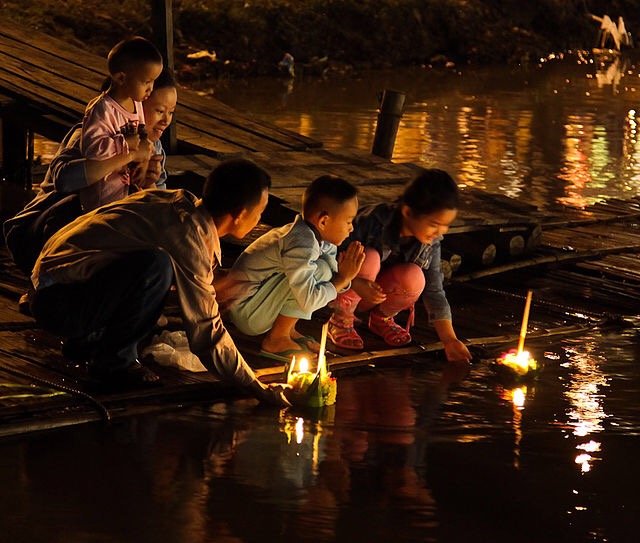 This is a professional photo. 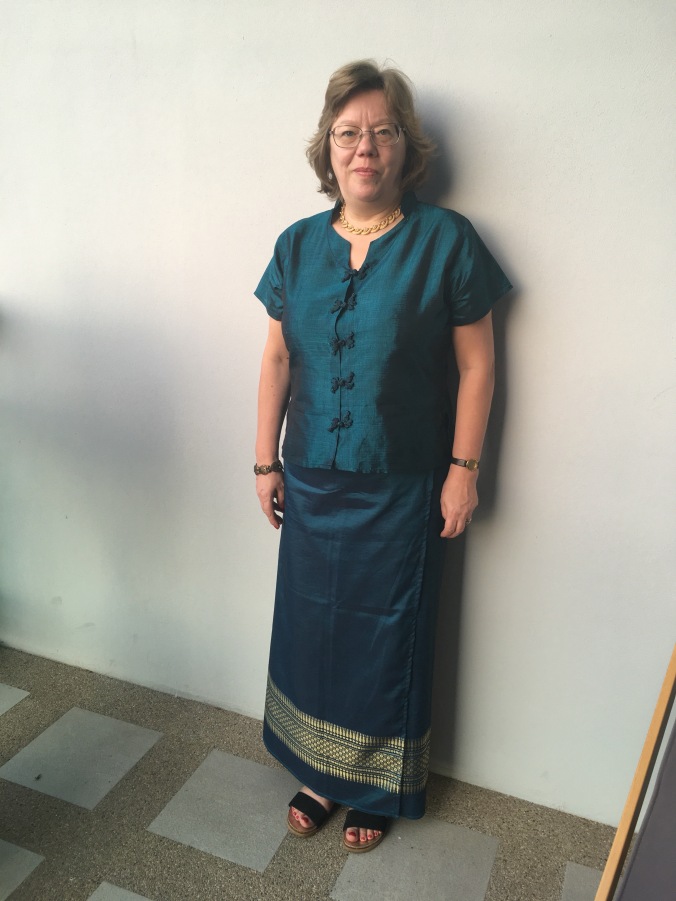 It looked lovely but I have to say that a long tight skirt is fairly restrictive and I could only take smallish steps. As it was a normal day’s work I found it quite frustrating not to be able to bowl along at my normal speed!!! And don’t even mention stairs!!! I couldn’t carry books AND hold my skirts up.

The team looked good though