Along with all the other attractions and ‘places of interest’ in China visitor numbers at The Shanghai Museum are reduced to 1/4 of what they used to be pre-COVID. This is not a problem if you arrive somewhere early in the day but we were too late to get into this museum and we forced to use the QR code to book a slot two days in advance at a specified time. It wasn’t easy to navigate as the booking system was all in mandarin so lots of guesswork was involved but we managed in the end!

So we turn up at our appointed hour and show the screenshot of our reservations. Then at the next checkpoint we had to show our Shanghai green health code. Then to another official we had to show our passports to prove that we were who we claimed to be. Then we went through a ticket checking machine. Then airport bag scanning security. Then a thorough body scan and pat down. All to get into a museum!!!!! Good grief.

The structure of the museum itself is interesting. It is a square building topped by a dome and arches. The dome in ancient Chinese philosophy represents the heavens and the cube is the earth!!!!! The flat earthers would be pleased, I’m sure.

Inside the museum is an impressive collection of ceramics, jade, fine art and ancient artifacts.

We started in the jade gallery which I was expecting to be very green but it wasn’t at all. In fact most was ‘white jade’ which looked a lot like marble. 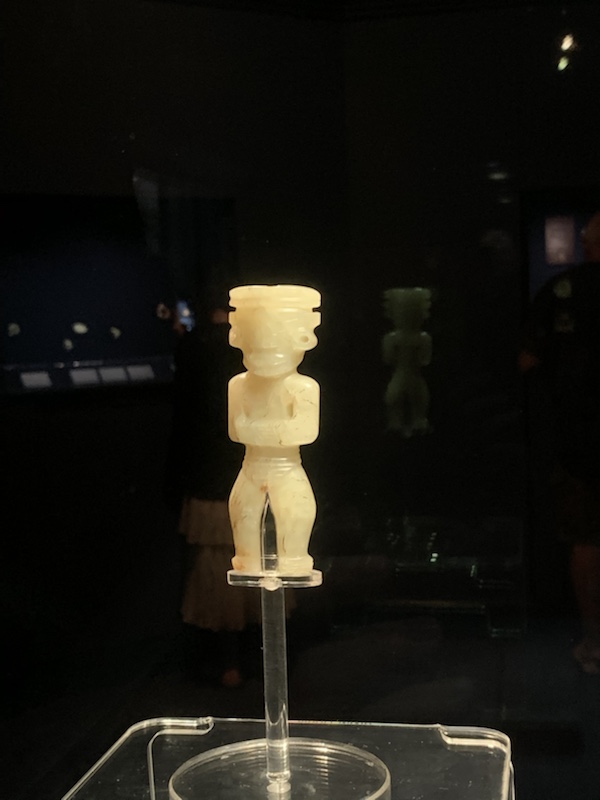 This little chap dated from 3500 years BC so pretty old and is a carved deity.

The jade was also carved into cicada shapes which were placed into the mouthes of the dead as part of funeral rites because they believed that being reborn as a cicada was extremely lucky. I’m not sure that I would want to be reborn as an insect. A cat maybe, they eat and sleep and have human servants, but a cicada, I don’t think so. 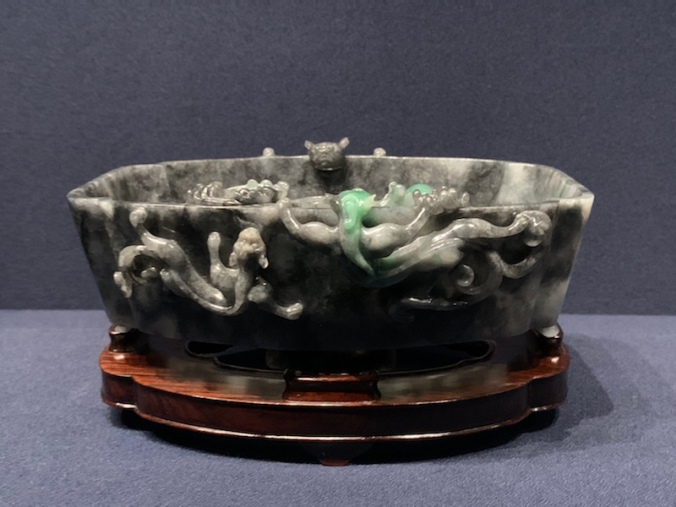 This bowl decorated with dragons was pretty impressive and one of the few green pieces that we saw.

to my surprise the ancient coins were not all round, some were this funny tooth shape. And when they did become round they had a square hole in the middle. This is actually quite sensible as the early folk could keep their coins threaded on a belt for extra security in lawless times. It was interaction with the traders along the Silk Road which influenced the production of flat discs for coinage. Paper money has been used in China since the 10th century which is when the rest of Europe was still in the dark ages.

The Ming vases collection was pretty cool and again my prediction of colours was challenged. We only saw a few of the blue and white designs. 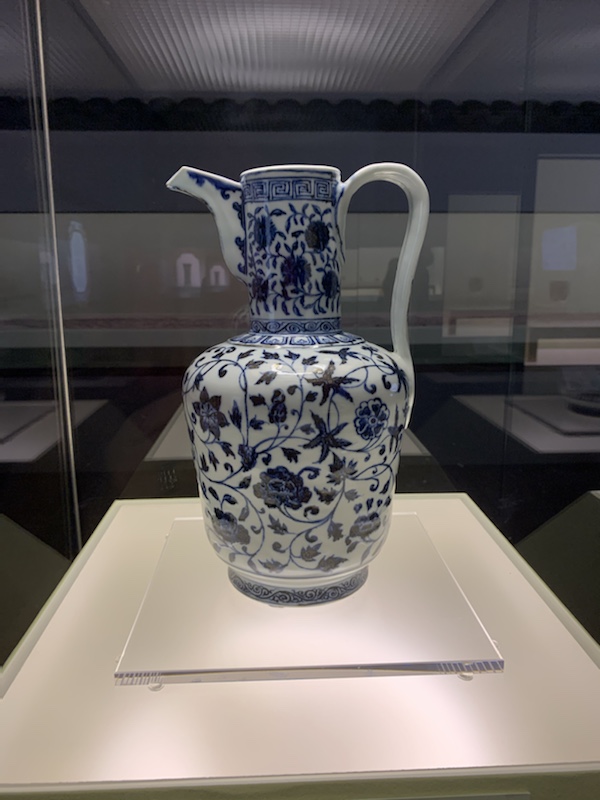 Kevin particularly liked this bowl below which dates back to 3000 years BC with a face on each corner. It could be a modern guy in glasses!

This colorful ceramic was an official with imposing headgear.

And this little chap was playing football back in the 7th century. So somethings never change…

Outside we saw a fountain (Kevin managed to capture it without any jets-sorry ) which was actually a sound and light water show that somewhat incongruously was playing ‘Scarborough Fair’. It was NOT what we were expecting after all that ancient Chinese history and culture!!!

2 thoughts on “Exploring Shanghai: The Shanghai Museum (a bit of culture)”