Sadly, yes this is the case. And here’s why…

1) After the frenetic first term in China (see previous blog) I wanted a rest, a lie down in the sunshine for a few days. Just to chillax and to de-stress before the onslaught of the UK winter weather & Christmas festivities. And what do we get? Rain! Unbelievable, I was expecting wall to wall sunshine and glorious heat with being so near the desert and all that but what we actually got was grey skies, wind, rain and a bit of a sandstorm. Just look at the color of this sky!

Our tour guide told us how fortunate were were because rain is so rare in Dubai but honestly, it wasn’t what I signed up for, i needed a lie down in some sunshine- I can get rain at home. The area has so little rain that they rely on desalinated water for pretty much all their supply

2) The superficiality if the place. Yes it was lovely to see the Burj Khalifa which is iconic as the world’s tallest structure. 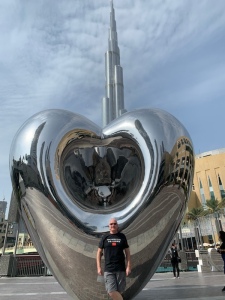 But Dubai is a totally modern city, everything has been built in the last 50 or so years. On Dec 2nd 1971 the 7 Emirati tribes were united to become the United Arab Emirates and from then the place really took off. Millions and millions of oil dollars have been pumped into creating what is essentially a playground for the super rich and the capital of commercialism.

On the one hand this means that everything is accessible, clean, spacious, and very efficient. Modern design at its best. All the sky walkways have travelators to speed up your journey and there are slopes and ramps everywhere. It is a wheel/push chair users’ dream.

But all the glitz, the glamour and the bling was blinding. Ostentatiousness on steroids. Even the reindeer street decorations were golden! I guess some people like that and are attracted to places where celebrities hang out. The Palm is built out into the sea and has private beaches. Allegedly David Beckham has a pad there. Kevin reckons that several celebs were given places just to boost sales of the others. It must have worked as 2 more even bigger structures are being planned.

Certainly the Dubai Mall with over 1500 retail outlets was a joy to us shop-deprived mites of China!!! I can’t tell you how excited I was to see M&S (until I saw the prices inside that is!!)

To be fair they weren’t all ultra high end shops. We saw a Japanese equivalent of the pound store which was doing a roaring trade in Christmas decorations (somewhat to our surprise given how Islamic the country is). Then we came across Mothercare and Hallmark cards which I honestly thought had gone bust (but maybe I am thinking of Clinton’s) anyway, there was a good range of retailers from all over the world including Waitrose, Kinokuniya and Hamleys.

The place is huge and contains entertainment as well as shops. There is an aquarium and an ice rink. This is the snow fight area (my boys would have loved that as kids) it is all plastic shreds apparently (which are harmless if ingested) 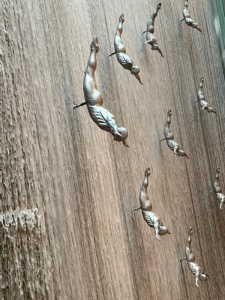 Outside was the spectacular dancing fountain with 5 minute shows every half an hour.

It would have been lovely to sit outside in the warm air with a cold beer… but hey ho that’s not allowed here. I suppose it’s good to detox before Christmas.

The place is proliferated with luxury from the cars in the local showrooms to the hotels.

This is the Burj Al Arab which is sail shaped

and the Jamaira Beach which is shaped like a wave to reflect the regions’ ties to fishing and the sea (not my photo as it was too grey when we saw it- what a surprise!)

These are 7* hotels no less – I had no idea that the star rating went beyond 5! We saw the construction work in the front of the sail hotel where they are creating a private marina for their guests’ yachts. It’s a world away from what I am used to and in someways a bit obscene when you consider all the poverty elsewhere.

The whole city was so new and shiny and tall that it reminded me of sci films where they predict futuristic living, (just without flying vehicles zipping around) It didn’t feel like a real place somehow. It’s hard to put my finger on it but I guess I didn’t feel as though it didn’t have any soul.

Don’t get me wrong, it wasn’t all bad. The buildings certainly were intriguing shapes and admirable feats of engineering. We liked the curves on this one

And the picture frame museum for its sheer originality

Although a Muslim country it practices liberal Islam and women are allowed to drive and work etc. We visited the spice souk with it colorful and aromatic stalls

Then to the gold souk which out-blinged everything else! I think mainly people come here for their wedding jewellry like this golden piece which would sit over the wedding dress. 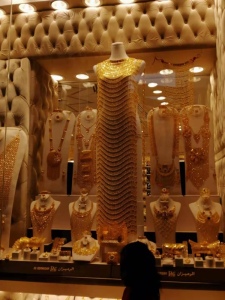 To be honest it looked more like chain mail than jewellery and the poor bride, she must be so weighted down she can hardly move! 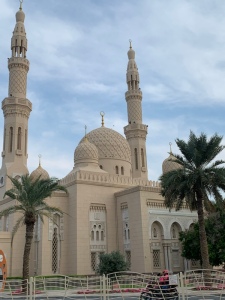 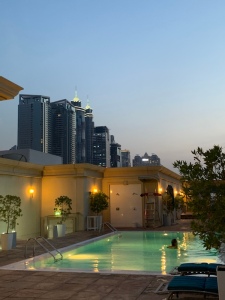 I am glad that we have been here, it’s another place ticked off my bucket list. And the hummus … well it’s to die for

I can hardly believe that the first half of the school year is complete. It’s has been extremely enjoyable but exhausting.

I have moved in, furnished the apartment, coped without any decaf tea, made new friends, learned some (really really) hard Mandarin words, found my way around a HUGE city, and tried to remember the names of nearly 700 children and staff. Phew! My poor little brain is frazzled.

Concordia is a friendly school but you work hard and the last week of term it was our annual Book Fair and while it was great to see the children hyped up about reading it was frenetically busy and the temperature in the library space soared to melting point as a result I came home every day with a headache. Did I mention that in our school either the air con is on or the heating and that is that. All centrally controlled and very hard to get any thermostat variation (although I am trying very hard) 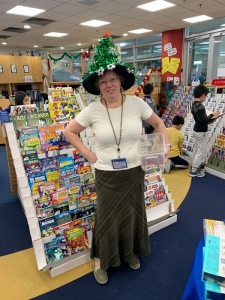 Probably the biggest change for us has been the technology. Not only have I had to migrate from Windows to a MAC environment but China is a virtually cashless society. It makes heavy use of WeChat which is an app that does pretty much everything. It works like Facebook, What’sApp, a translation tool and your bank. There is probably more that we haven’t got our heads around yet!!! I don’t use a purse anymore but I never go anywhere without my phone!

It has been a whirlwind few months with so many new experiences.:

We have seen cute pandas close up, 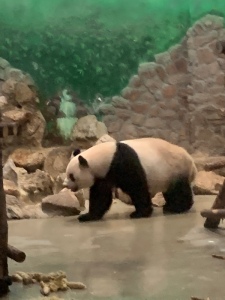 experienced the enormous crowds at the water towns, 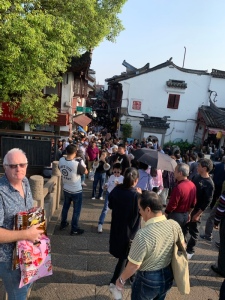 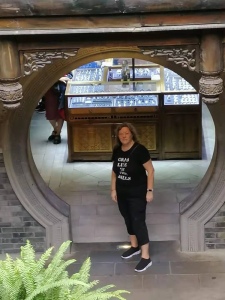 Been to a wonderful wedding

And seen the iconic buildings that make up the Shanghai skyline

But most of all we have eaten! The food here does not have the same flavors as Thai cuisine but my team have taken on a self-appointed mission to introduce me to as many different foods as possible. Probably too many as despite all the walking my waistline seems to have expanded!!! 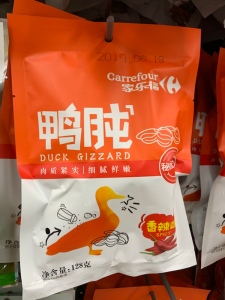 All that AND I fitted in a librarian’s conference in Kuala Lumpur where it was great to catch up with all my Bangkok colleagues. We had the pleasure of a cocktail mixology class in the evening led by a former UoC student. What a small world it is. 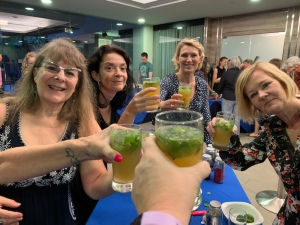 The best part though has to be the people we have met. It has been fantastic to re-connect with our Chinese friends

I have a very supportive library team 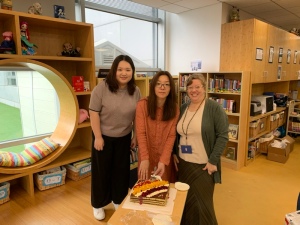 And the children are just adorable

These are from the Teddy Bears class who spontaneously brought us some chicken and mushroom soup as a Christmas gift. Secret Santa was also very active in the final week of school which was brilliant fun. The school is so caring that it is a pleasure to work there.

A pleasure that will get easier now that I have learned so much and got to grips with how everything works here.

And Kevin? Well he has signed up to be a sub in the library if one of my team is sick. And he even has a few hours of his own working in the High School as a maker space technician, trying to ensure that the kids don’t laser cut their fingers off. 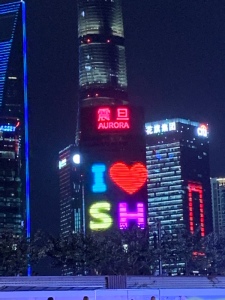 We are however ready for a rest so have broken our journey home with a 4 night holidayette in Dubai. More on that anon.