Well actually a library conference… But I won’t bore you will all my wonderful learning experiences here. Although I have to say that the decor in the Taipei American School library was amazing. Check out the Elmer carpet.

and I was delighted that when the new Global Readalouds were announced I had already read one and another is in my ‘to be read’ pile. So I think that is huge progress! I had to self-fund to attend (but that’s another whole story!)

This little tripette also afforded a glimpse of another capital city. I was very impressed with how modern, clean and well organized Taipei is. After Bangkok the roads were well tarmac’d and unlike Vietnam the pavements had both space for pedestrians AND motorcycle parking. There were even ramps at kerb crossings. Holy Moly! Disabled access no less!

Taipei feels less congested than other cities in SE Asia as we didn’t have to battle with swarming crowds just to get anywhere.

On arrival Marivic and I were hungry so we dived straight into our first culinary experience. The authentic Taiwanese restaurant by our hotel.

Here we had a traditional Taiwanese hotpot. To be honest we didn’t have much choice as that was all they served!!! The pot bubbled away on the burner in the centre of the table with two flavors of ‘soup’, the one in the left is sour cabbage and the whiter looking one was pork collagen (!!!!) we then cooked the meat and vegetables of our choice. An interactive dining experience the only time I have ever knowingly eaten collagen.

The next evening was a trip to the famous Shihlin night market. Our senses were assailed by a slew of succulent scents and sizzling sights. I’ve no idea what most of them were but here are some of my best guesses.

This man was cooking some sort of pork dumplings (I think)

Then some puffy things which might also have had meat in them. Possibly pork. it’s popular here. 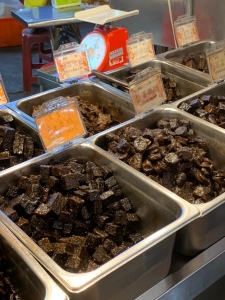 But back to the pork theme. This time in a tough bread crust and baked in an intriguing oven where they resembled limpets on a rock!

And then this. Best guess is jelly and there was lots of it. Maybe longan flavored.

And finally to the 7-Eleven mini mart for some wicked looking eggs. I think that these are preserved eggs that they call 100 year old eggs! Another non-appetizing name.

After browsing all that we actually ate a flame grilled steak with noodles and egg in pepper sauce. It was £5 and so big we shared one. This place also served only one dish so was able to keep its costs down.

For our next (& last) day we visited the iconic Taipei 101 which is Taiwan’s tallest building and sometimes referred to as the ‘bamboo tower’ for obvious reasons.

At the time of its completion in 2004 it was the world’s tallest building, exceeding the Petronius Towers by 57.3m. This record was then superseded by the Burj Khalifa in Dubai in 2010.

It does, however have a record breaking fastest (& smoothest) elevator ride. From the 5th to the 87th floor takes only 37 seconds. It was amazing, had no time to be scared!

I’m not normally a great fan of heights but I took a risk and fortunately I was ok. Mind you I didn’t go very near the edges. The enclosed glass structure made me feel reasonably safe & not wishing to push my luck I declined a further excursion to the observation deck. The views across the city were worth it.

An interesting feature of the tower was the enormous damper which is basically a steel pendulum that acts to create stability in the structure by giving it the flexibility to withstand typhoons and earthquake tremors which are common in the region. I’m not exactly sure how this works, it sounded like engineering magic.

Then it was on to some more dining. This time English Afternoon Tea. And yes, the irony was not lost on me that I go all the way to Taiwan and have afternoon tea!!!

And the verdict? Well the salad pots had French dressing, the sandwiches were baguettes and the square dishes were Creme brûlée’s- so perhaps a ‘european’ afternoon tea would have been a better description. But they tried hard & I must say, it was one of the best cups of tea I’ve had out here so worth every Taiwanese dollar.

And finally, just to prove that we did do some work…

One of the real pleasures of living and working abroad is the ability to pop over to some very interesting places for the weekend.

And so it was that Kevin booked a weekend away for us all to the historic town of Hoi An in central Vietnam. I must say this is a gem and not to be missed if anyone is visiting the region.

This picturesque trading port grew to prominence in the 16th century attracting traders from Japan, China and even as far away as a Europe! The structure of the town and its buildings have been preserved making it a unique cultural heritage site which was recognised by UNESCO in 1999.

One of the main attractions is the intact covered Japanese bridge which was constructed in 1593 to connect the prosperous Japanese and Chinese quarters of the town. 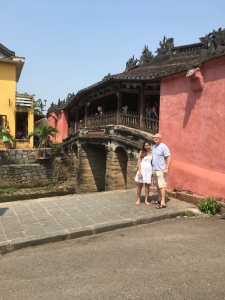 Hoi An boasts multiple temples and pagodas many with beautiful dragons which symbolise Power, prosperity and stability

What fascinated me most though were the hanging spiral cones. They were everywhere covering all temple ceilings.

We must have been on our 4th temple of the day before we realised that they weren’t just decorations but were actually coils of incense some of which were smoking gently. You can imagine the smell if they were all lit at the same time for a festival!!! 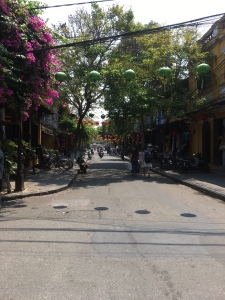 Hoi An is perhaps most famous for its coloured lanterns. These are silk stretched over bamboo frames and they transformed the place into a magical wonderland after sunset. 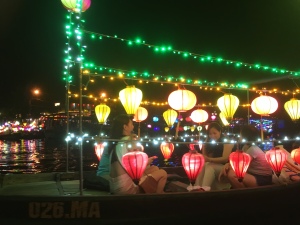 We took a boat ride that drifted calmly along the river admiring the twinkling illuminations (which frankly put Blackpool to shame!)

Then we lit a candle and set it adrift with a little prayer. It never ceases to amaze me how we humans are attracted to lights on water as a form of spiritual expression.

And then it was time for our 90 min flight back. We had to leave all the vibrant colours behind but a wonderful time was had by all. 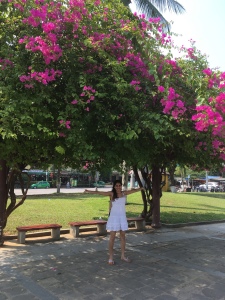 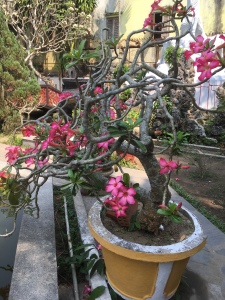