Virgin worship has been prevalent in Asia for thousands of years but The Kumari began in Kathmandu in the 17th Century.

No one is sure exactly how it began and there are many stories. One is that King Jayaprakash used to play dice every evening with the goddess Taleju, on the condition that he told no one about the encounters, when one night his wife interrupted them. The goddess retreated into a young girl and has remained there ever since. The king, without the patronage of the goddess had to search amongst the Shakya people until he found her again.

Another version (and a more likely one) is that the king was in fact a paedophile who had intercourse with a very young girl who subsequently died. The people believed that the goddess was so angry with the King that she entered the body of another young girl and forced the King to worship her.

Either way the tradition has continued to this day with a pre-pubescent girl being specially selected to be venerated as the physical manifestation of the divine female energy.

In exactly the same way that the Dali Lama is chosen the land is scoured to find the child who the goddess has selected. In the case of The Kumari she can only come from a particular high caste Hindu family of the Shakya or Bajracharya (mainly the gold or silversmiths)

She must be free from disease

And a voice as soft and clear as s duck! (They obviously haven’t heard the ducks on the Hest Bank canal!!)

If a girl is found then her horoscope is examined in detail to ensure that there are no clashes with that of the King.

Once a child meeting all these criteria has been found then she is subjected to a terrifying ordeal. She is put into a darkened room with the severed head of 108 buffaloes and goats. Men in masks dance around uttering blood curdling screams. If the child remains calm then she truly is the goddess because no divine being would be afraid of demons.

(In her book From goddess to mortal which I must read, a former Kumari says that it is probably only about 12 severed heads and nobody danced in masks at her selection. Perhaps the severed heads are becoming pricey or maybe the mythology of the process is part of the attraction.)

In any case, once selected The Kumari and her family are moved into a special palace where they live like royalty until the girl comes of age and has her first period. At this point the goddess leaves her and she becomes mortal again.

I have to say that I was intrigued and have not yet decided if this is a good thing or not. On the one hand it is manipulation of an innocent child but I was pleased to hear that nowadays tutors are sent into the palace and she does receive an education.

On the other hand GIRL POWER!!!

The Kumari is worshipped and venerated. No one, even her siblings are allowed to contradict her. She and her family live in luxury for a few years and this is a sought after honour in Nepalese culture.

Traditionally The Kumari’s feet do not touch the ground and when she goes outside (special festivals) she is carried in a golden palanquin. She makes only a few public appearances and if you do catch sight of her this is supposed to bring good fortune.

In an interesting literary aside those of you who know The Lives of Christopher Chant by Diana Wynne Jones will recall the child Ashreth, a little girl worshipped as a goddess in one of the worlds visited. This character is based on The Kumari. 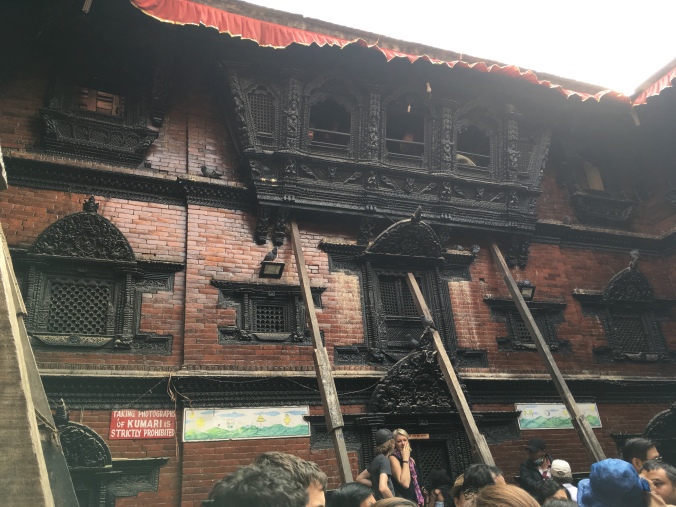 We saw her! We were ushered into a small courtyard in a house off Durbar Square. There were perhaps 40 or 50 of us. We were told to be silent and after a few minutes a little girl appeared at the window of the second storey and gazed down at us. She was dressed in red and had her hair tied up in a bun. I learned later that she is the new Kumari and is 3 and a half years old.

She looked at us all for about a minute I would say and then retreated. We were not allowed to take any pictures and we were not charged an admission fee (so she is not being used for financial exploitation thank goodness).

I felt fortunate to have glimpsed something which the Nepalese consider holy but at the same time I had misgivings about the use of a child in this way.

Our guide told us that once they return to normal life the girls can be spoiled brats (hardly surprising if you have never been contradicted since you were young) and as a result they find it difficult to get a husband!

Today though we are in Pokhara and had an early morning visit to see the sunrise over the Himalayan mountains. After a week of inclement weather in Pokhara we were blessed with a cloudless sky and a glorious sunrise. 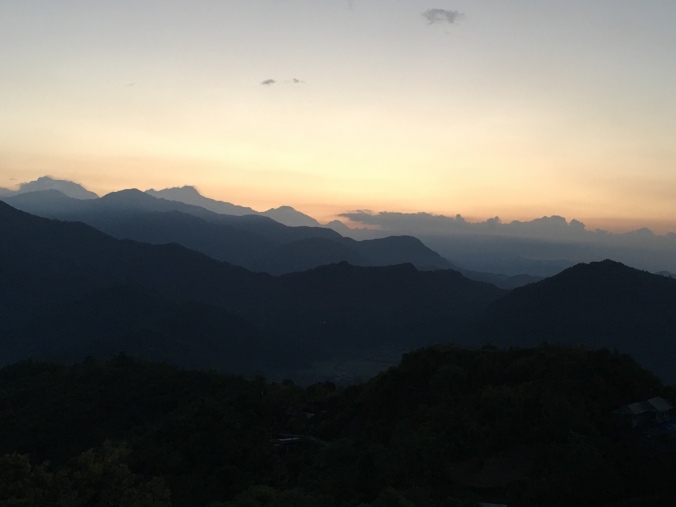 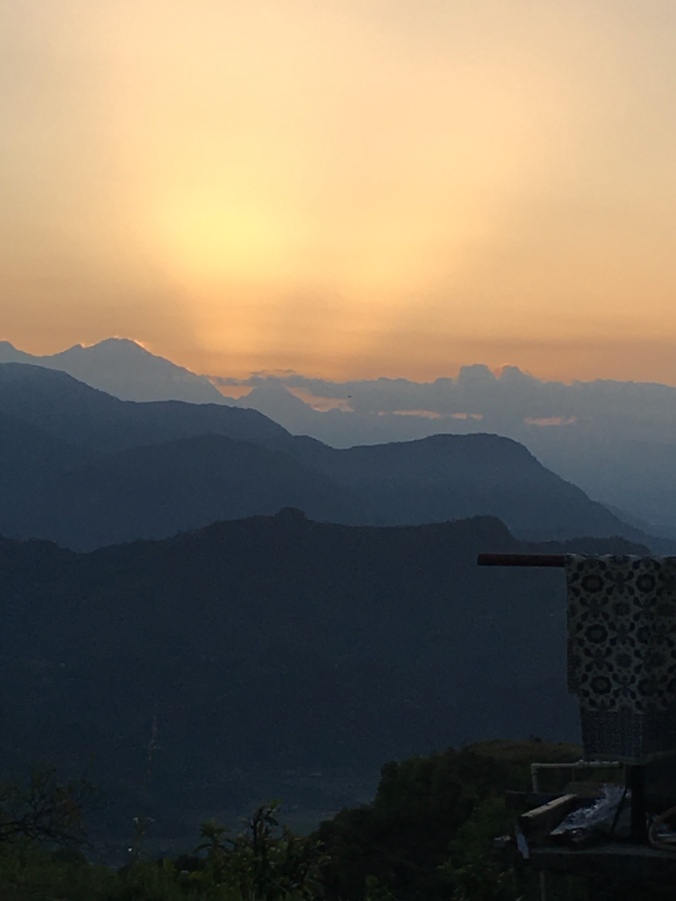 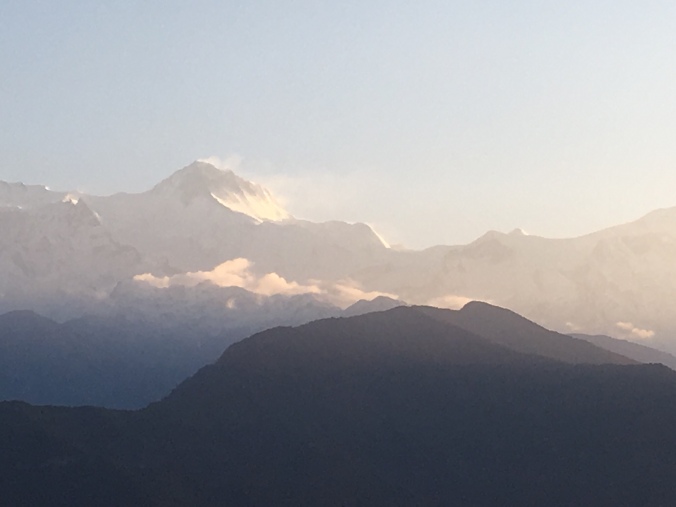 Maybe there was something to the good fortune after all…