We traveled by high speed train from Xining to Zhangye. It took 2 hours and unfortunately it was late evening so we couldn’t see anything from the windows. 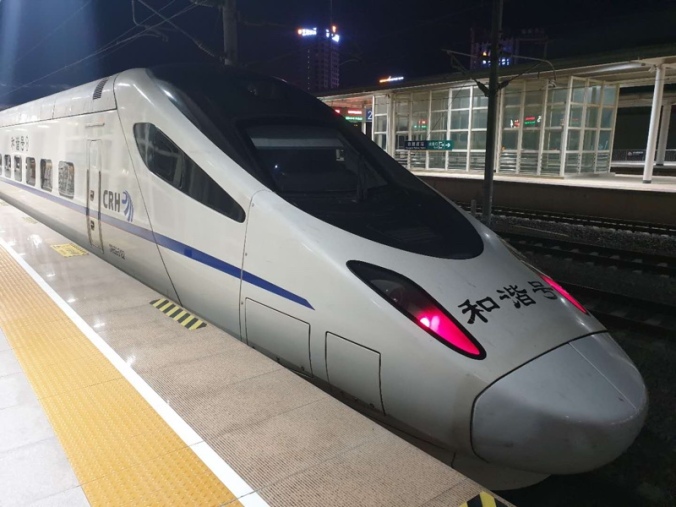 It was quite a palaver getting into the station as the government has new tracking regulations which seem to apply only to foreigners. An official wrote down our passport number, visa number and telephone number. It was a fairly labour intensive task but we got through in time to make the trip 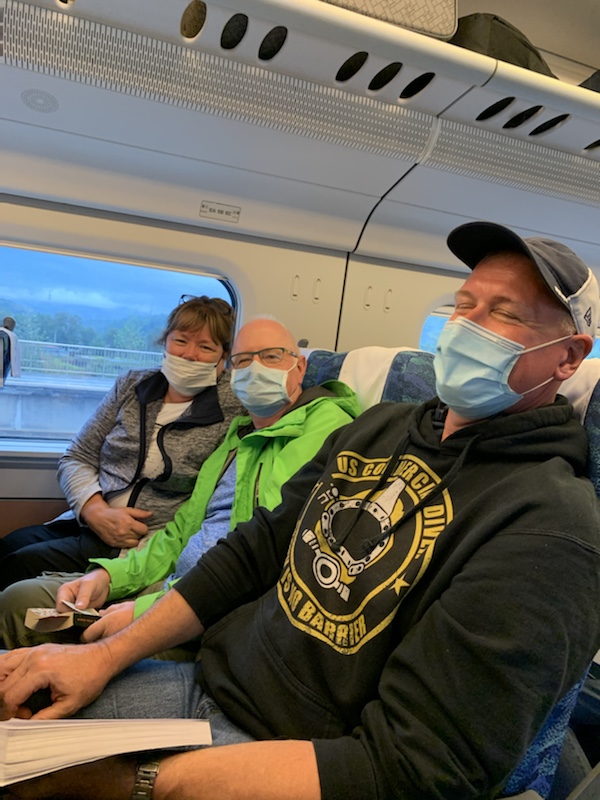 Exiting the station at the destination was another lengthy information gathering process which also included finding the latest stamp in our passport for them to check, before we made it exhausted and travel-weary to our hotel. At which point we were told that we needed to show our negative nucleic acid test results which none of us had because we had been told that we didn’t need them!!! It was a tense time not knowing if we had a bed for the night and we all had to pfaff around downloading a separate QR code and filling in details online and then Kevin & I also had to find our quarantine results certificate from back in April which fortunately we had pictures of on our phones. It was a HUGE relief to fall into bed that night.

In the morning we visited a 900 year old monastery. 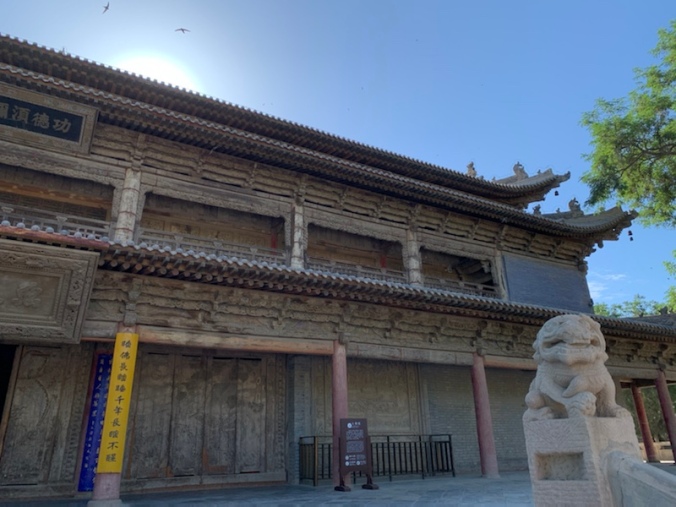 Very few structures remain from this period because successive dynasties burnt the buildings to the ground as they didn’t want the people to remember the old ruler and the the Cultural Revolution finished off what was left.

In the case of this temple there is an enormous reclining Buddha inside with Chinese features so it escaped destruction. 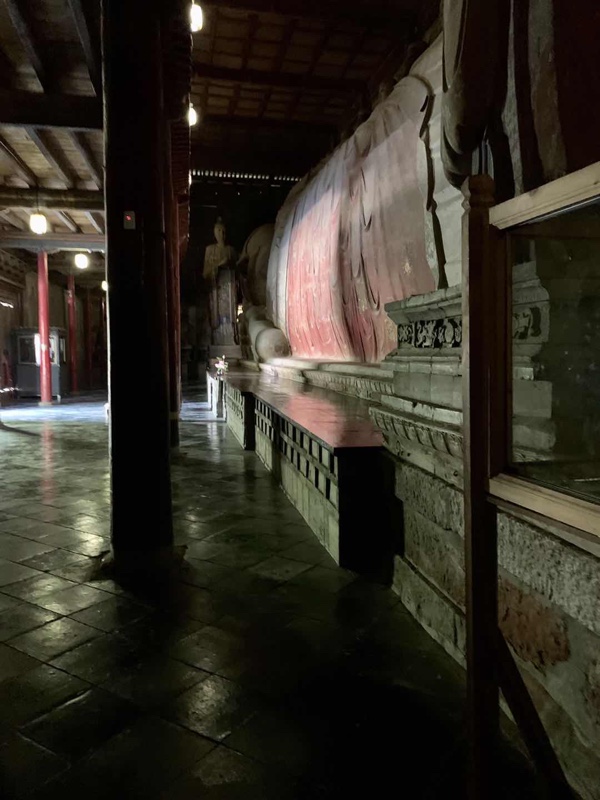 The surrounding compound was beautiful though. 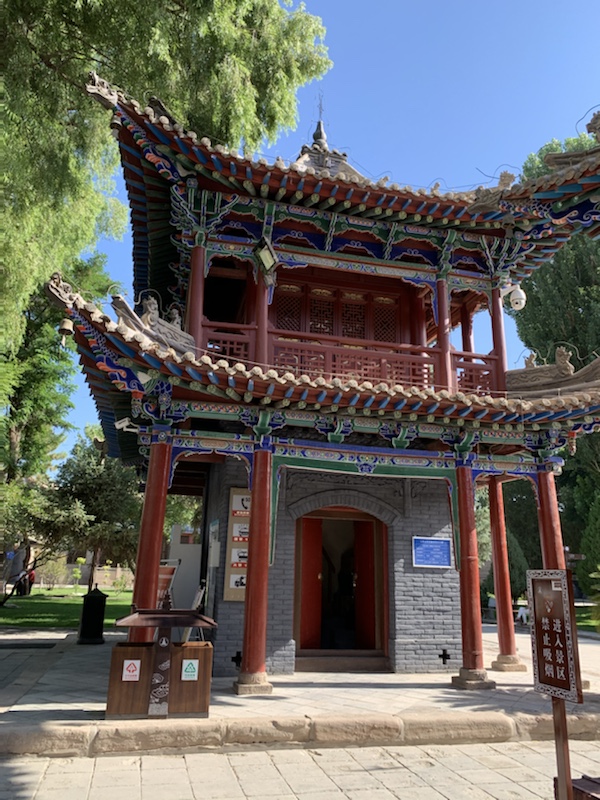 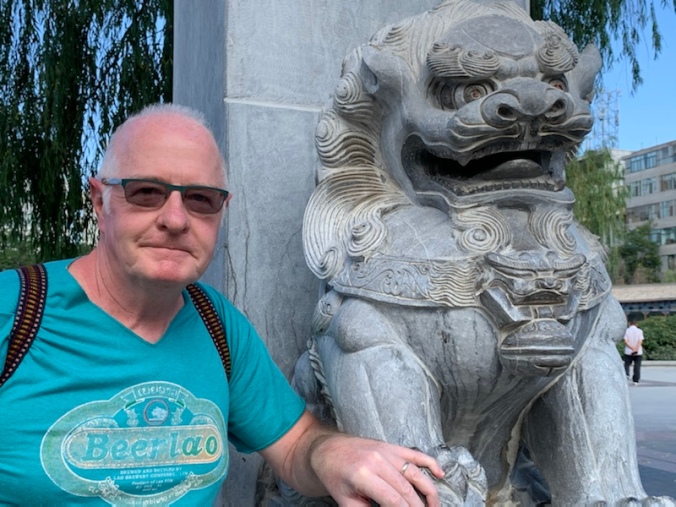 There was a man writing poems on the pavement outside. 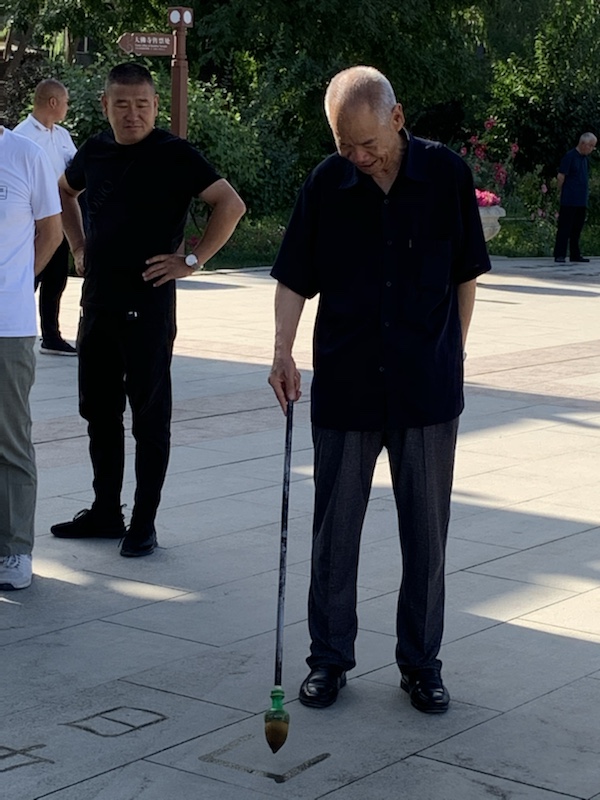 Our next stop was supposed to be another monastery which had been been constructed Petra-like into the rock but apparently they had decided only yesterday that all foreigners needed to show negative test results before being allowed in. We think that they heard we were coming!!!

This is a model of what we SHOULD have seen. 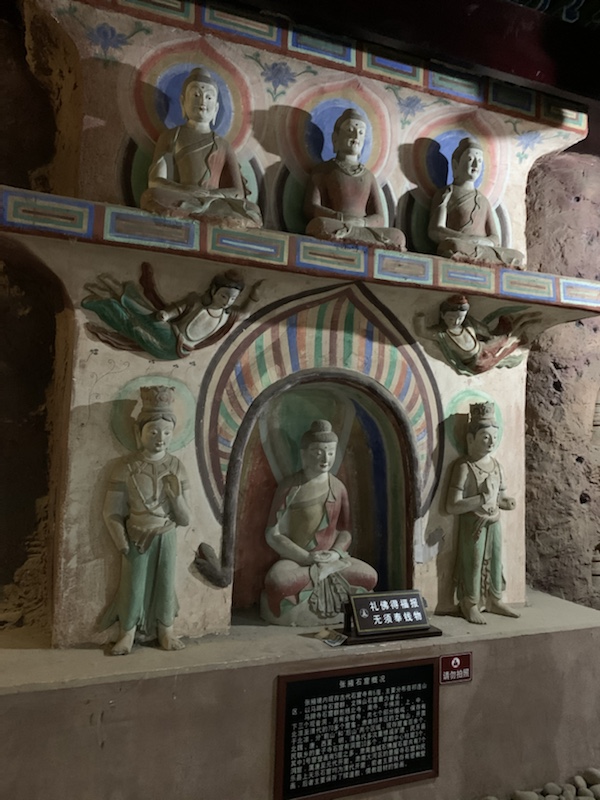 But instead we drove out of the city (Zhangye) and what was quite incredible was that it was all urban building as you would expect, then we went through a tunnel and came out the other end to this… 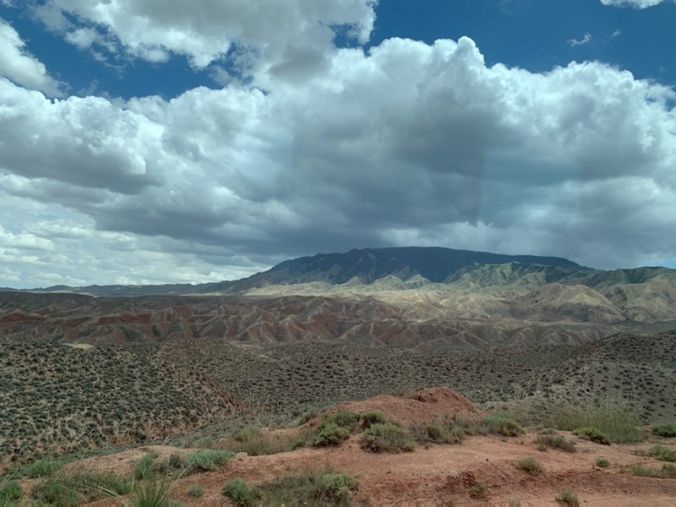 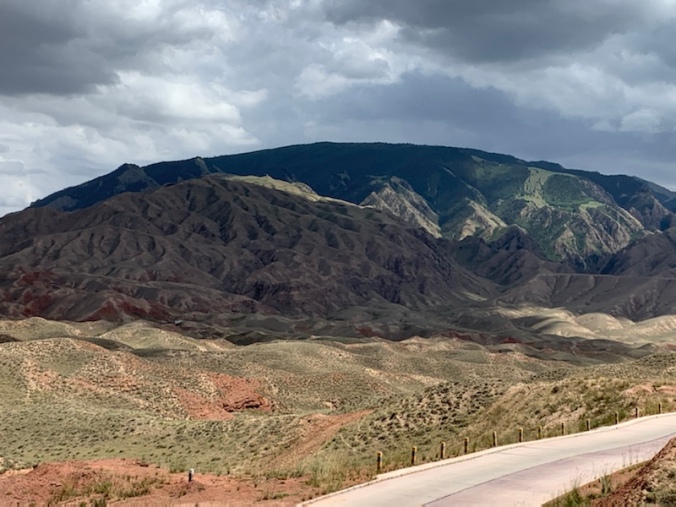 It was almost as through we had gone through some sort of portal and emerged in another world!

Lunch was interesting. We all ordered short noodles but when the bowls arrived they were way too salty. We have noticed here that the dishes are loaded with MSG and they even have bowls of it around for you to add your own extra! MSG doesn’t have the bad press that it once did but even so we tend to steer clear of it and in fact most of us were unable to finish the noodles.

Fun fact: you can get MSG from bananas

At the entrance to the canyon was an enormous prayer flag tent but this one was in Mongolian style. You can see the difference in the shape. It looks like a hat. 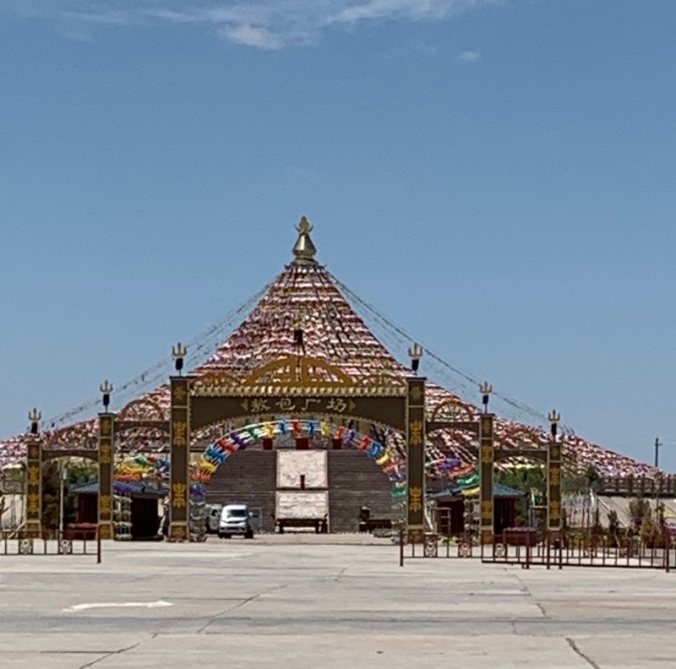 In actual fact were were close to the border with Inner Mongolia. When I was a child Inner and Outer Mongolia seem like the farthest away and most inaccessible place in the world. I had no idea that one day I was actually be here.

Then on to the canyon. This was simply stunning. The whole area was a lake in prehistoric times and the colors were muted but like nothing we had ever seen before in a landscape. It was almost like being on an alien planet. 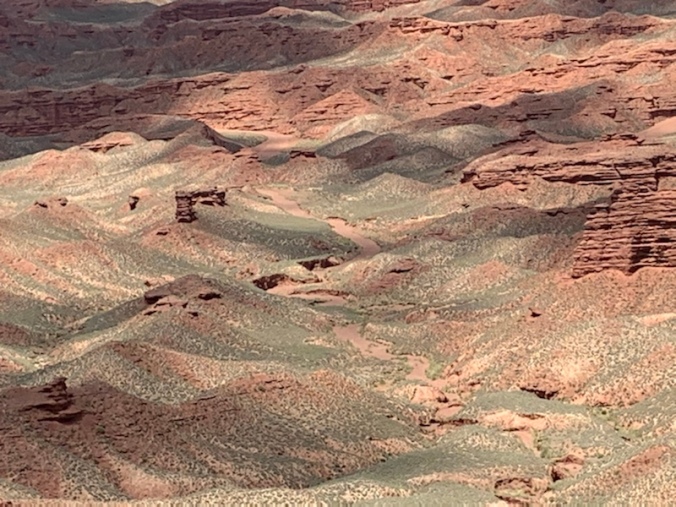 Our American colleagues assured us that it was just like Arizona. 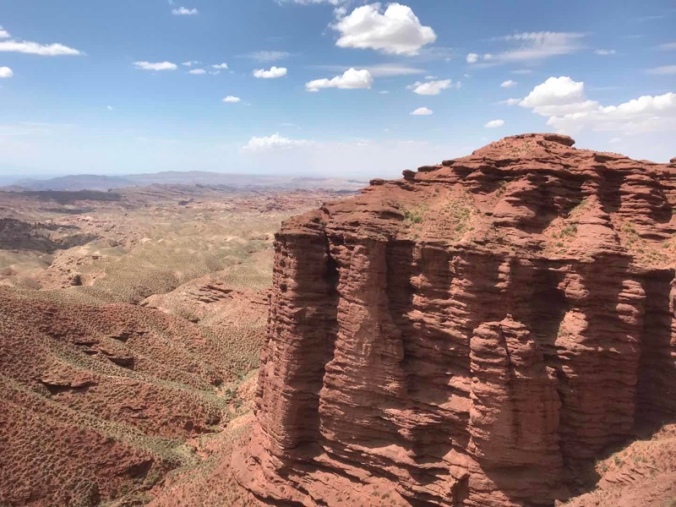 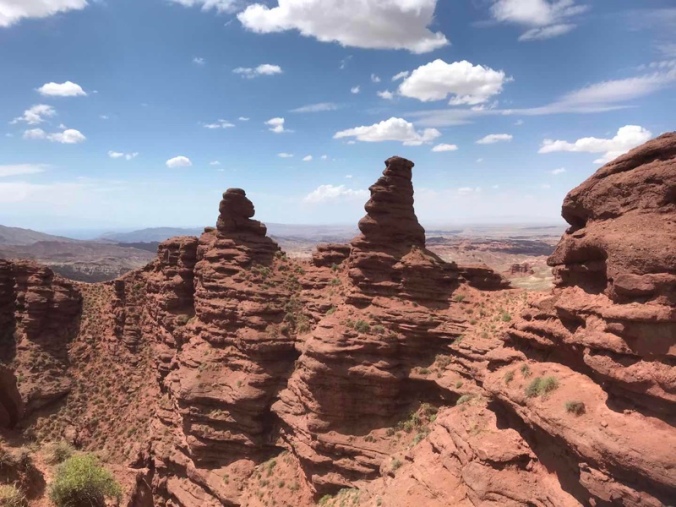 We were high at 2387m which meant that even short climbs left us quite breathless. 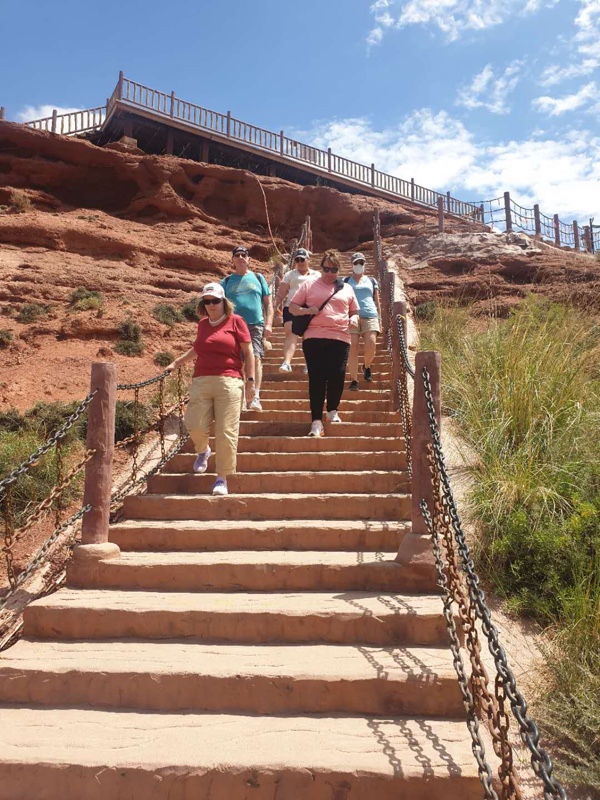 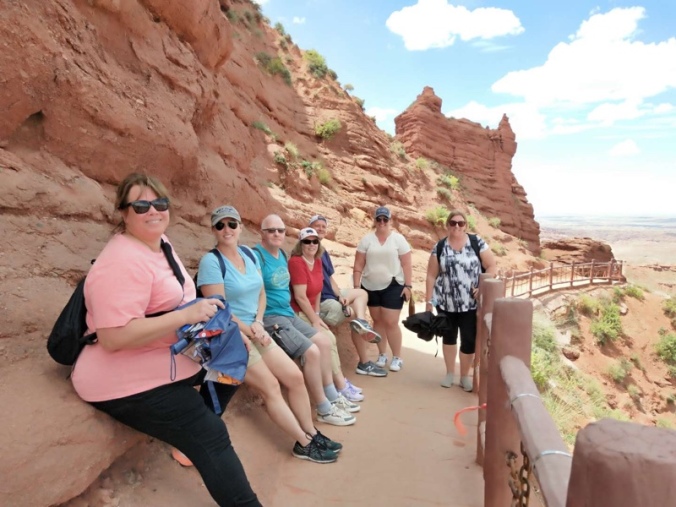 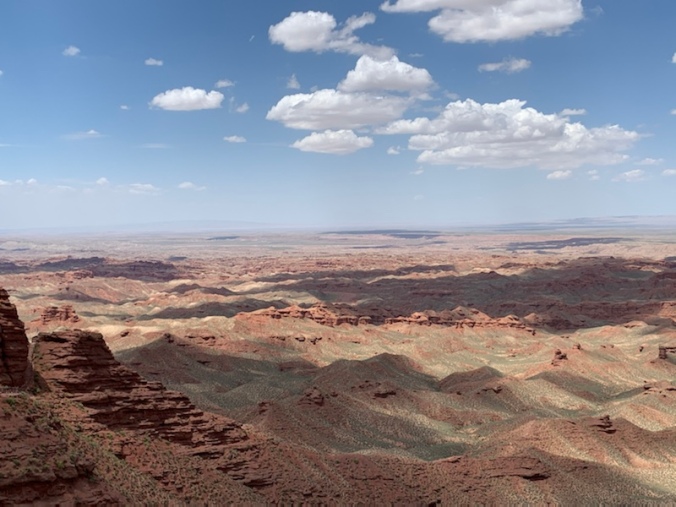 One of the really annoying things about China is their need to pipe music into all scenic spots. We speculated that it’s because they don’t cope well with silence but we don’t know for sure. It’s very annoying though as the beauty and tranquility were a little spoilt.

I was delighted that there was a good path with a sturdy guardrail but even so I didn’t go too near the edge! 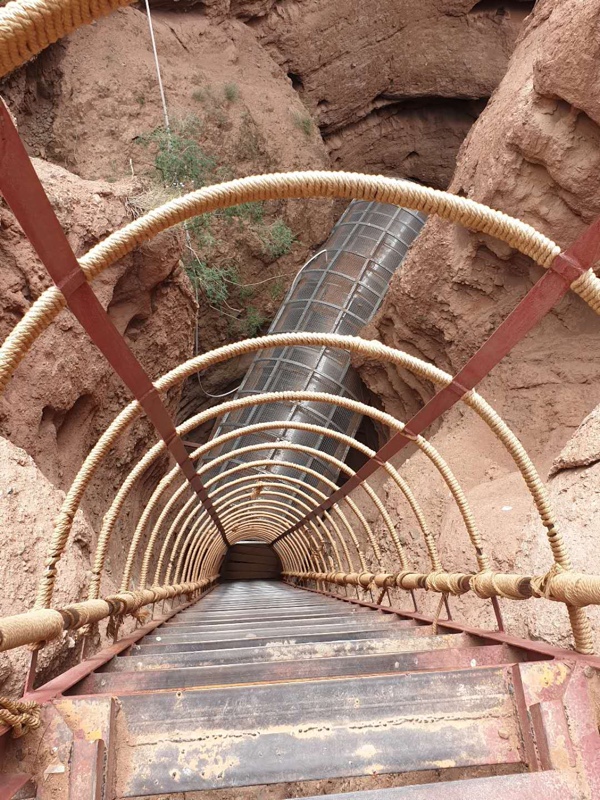 So I opted out of that.

All in all the day was amazing. The terrain was so unlike anywhere we have been before.

Once again thanks to colleagues for their photos some of which were better than mine.