We arrived in Columbo on Saturday 9th Feb. To be honest the health screening at the airport was a joke. We walked past the thermal imaging camera and behind a screen was a bloke more interested in his phone conversation than watching us!

Then another health declaration form which we had scrupulously completed was snatched away and dumped with all the others. Is anyone actually reading them I wonder?

We are staying in a lovely quiet place called Zylan villa It’s quiet small with only 6 rooms and was was once a villa owned by an artist from Hong Kong so it is beautifully done all to her artistic taste with lots of peaceful relaxing spaces. 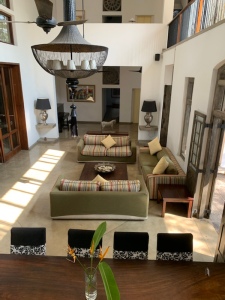 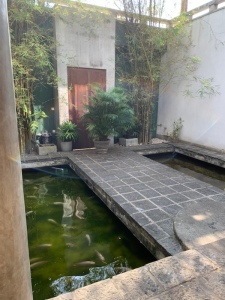 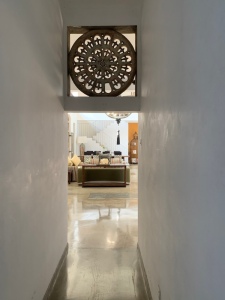 There is even a plunge pool on the roof (although the local crow population used it as drinking water so clearly there were not enough, if any chemicals in it) 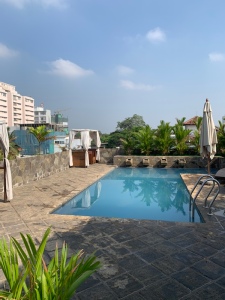 I love the book swap cage. It’s a great idea 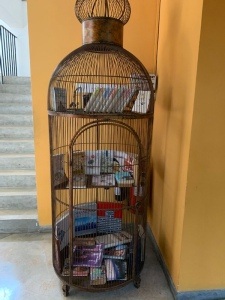 Some good nooks and crannies in which to set up for work. This is the view from my new office. It was very peaceful and I got loads done. 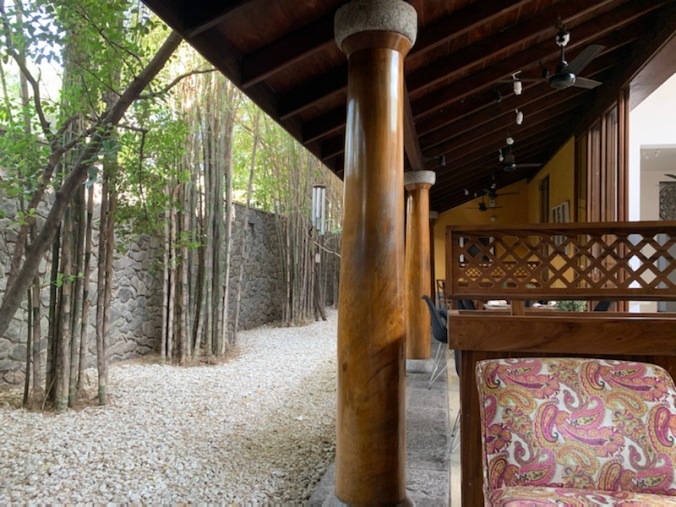 There was some confusion at check in about whether we had paid fully or not. We need to send washing but K reluctant to until payment issues resolved. They think we owe them & k says we have paid in full via Hotels.com. First time we have ever had this sort of confusion. Obviously they haven’t yet been paid.

Only a few interesting things to see in Colombo. It’s quite a boring city on the whole. We visited the museum which had an amazing collection of masks. Plus their Crown Jewels. I love the crown. So square. The entire set was plundered by the British but we gave them back. 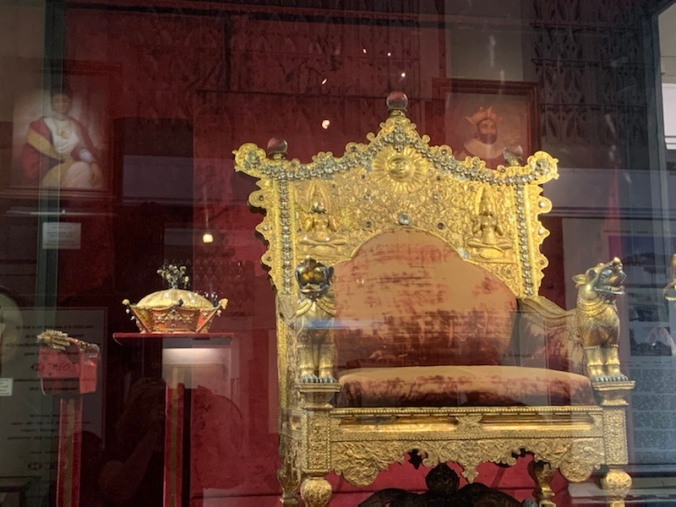 Then a trip to their main temple which was so cluttered with stuff that it reminded us of Chatuchak market! 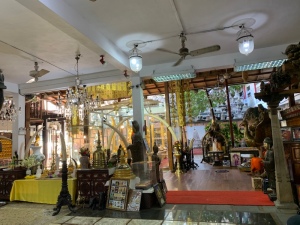 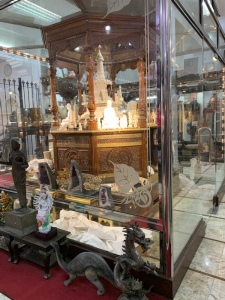 Check out the dinosaur next to the Chinese dragon. All places of worship can only be improved by the addition of dinosaurs I feel. Then there was the life sized stuffed elephant! 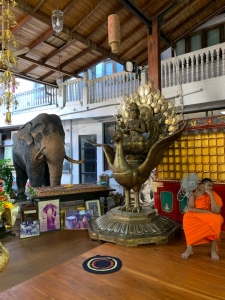 This section was so brightly painted that we dubbed it the ‘gaudy Buddha’ room! 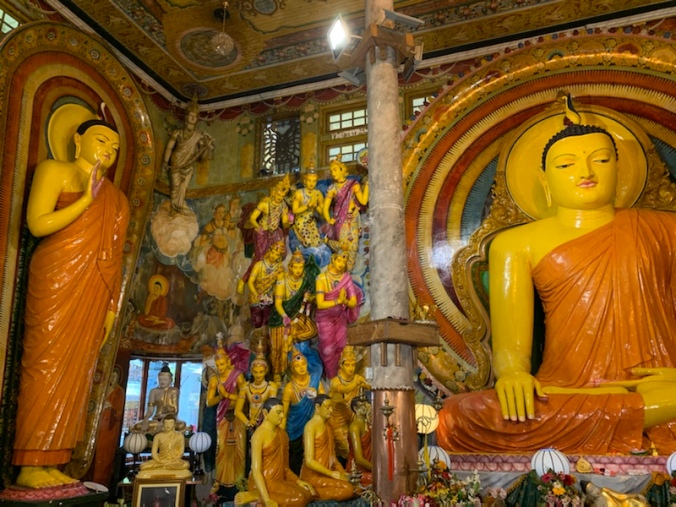 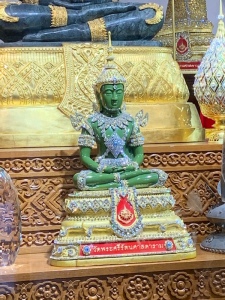 But we were totally not expecting to find a conquistador here!!! He is more of a war-monger. Perhaps he was guarding the precious statue. Who knows! 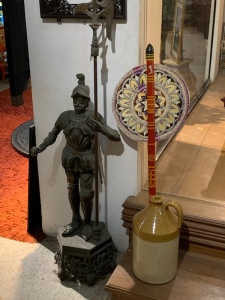 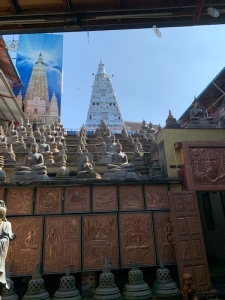 We discovered some basic do’s and don’ts for visitors in this country:

2. Don’t turn your bum to a Buddha statue. They don’t like it (allegedly).

3. Don’t compare Sri Lanka to India. Even if you have been to both and have an opinion! It’s a very touchy subject. Just for clarification, Sri Lanka was never part of India, is not part of India and never will be. Ok. Got it! It’s not Indian even if it feels very similar.

4. Don’t get carried away in public (even though we witnessed quite a lot of canoodling going on in Cinnamon Park. Lots of it!)

5. Don’t try to check into a hotel with no beds. Seriously guys, this is an actual problem. Confusingly many small Sri Lankan restaurants are called hotels, from the time when the best place to get a decent meal was a real hotel.

6. Don’t take no for an answer. When locals shake theirs heads from side to side what they actually mean is ‘yes’! (But remember it’s not India!)

On a book-buying expedition (for work as I need to record stories to send to the children as part of their online learning) we were thirsty. So we decided to have some tea because while in Ceylon you really ought to. 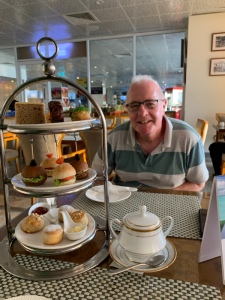 We ended up having High Tea and it cost £3.85 for all that food plus two cups of tea BETWEEN US! Yes, that’s right, that’s £1.92 each! You’d be lucky to get a cup of tea for that back at home!!! Unbelievable.

The main form of transport here is the Tuk tuk these are more comfortable to sit in that the Thai ones, nifty in traffic (often driving down the wrong side of the road to avoid queues!!!!) and extremely cheap. 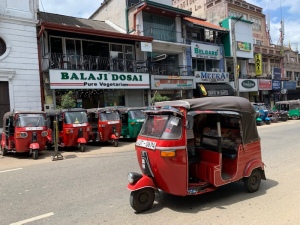 It costs only £1 to get anywhere in the city. The cost of living here is extremely low. In actual fact a week’s stay here in this nice hotel is less than one night in the (full price) beach room in the Maldives. 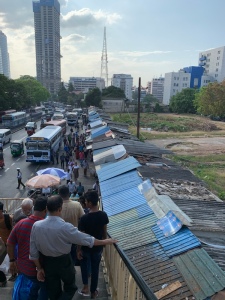 Had a bit of a visit downtown. This is more like the India of my memories. It was crowded and chaotic with uneven pavements and lots of crazy driving.

One of the disadvantages of packing to go to one destination for a week and ending up traveling around 4 countries, is that you don’t have the DK or Lonely Planet in your luggage. We usually research where we are going and have a rough idea of what we want to see. Not this time. We are fortunate that we do at least have Google but we have found that it isn’t always up to date!

Anyway a look at the map showed an area called Fort and we hoped that there was one. Sadly that wasn’t the case. There is another area on the map called Slave Island, but we decided against that (just in case)!

This is the Lotus Tower (no prizes for why), is inspired by the flower which culturally here symbolizes’purity’. 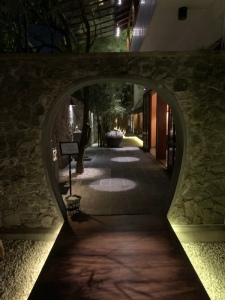 Colombo is quite a boring capital. There isn’t much to do or see. Even the top 20 things to do in Colombo lists ‘Starbucks’ as an attraction!!!!

We push off now for a weekend visit to Kandy, the cultural and literal centre of the island. 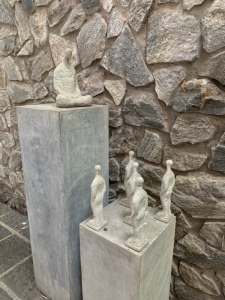