The main reason for our visit to Chengdu is to see the Pandas. These iconic bears are native to western China & so we couldn’t really live here without seeing them in their home habitat.

Beginning in 1987 with 12 rescue pandas the park has grown to being the single largest center for pandas bred in captivity. 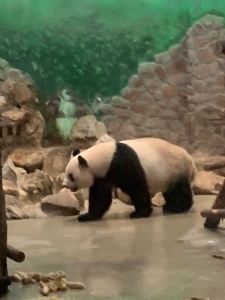 Pandas eat between 30-50kg of bamboo a day and the recent human population growth has seen a rapid decline in their available natural habitat which has put them on the endangered species list.

That coupled with the precarious breeding cycle (we learned that a female is only ‘on heat’ for a couple of hours each year) had led to a decline in the wild population.

The breeding centre aims to raise pandas which can ultimately be released back into the wild. But first they had to overcome several problems which they have done with advanced genetics to prevent the problems of inbreeding.

The scientists test the female pandas urine to be able to tell when she is ready to conceive. The center has successfully impregnated females and raised over 100 panda cubs. We visited the nursery where the current cubs slept and they were just adorable. Cutenesses overload. 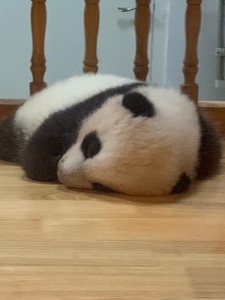 Pandas have a short oesophagus and this means that they only digest 17% of their fiber rich diet.

One consequence of that is that they rest or sleep a lot to conserve energy. Many of the pandas we saw were just ‘hanging’ 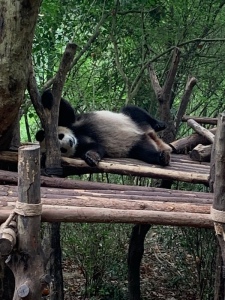 Some of those positions did not look comfortable!

The park is also home to several Red Pandas 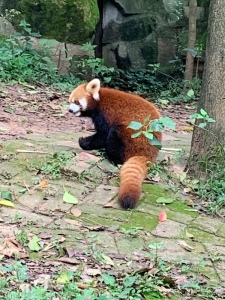 The are called this although they are not technically related to the panda species at all! It’s just a name to confuse everyone.

Perhaps ‘foxy lemurs’ might be a better name. Any other suggestions folks? They were still quite cute too though. (Not my picture below)

We had a thoroughly enjoyable day with multiple opportunities to see these cuddly creatures. Until recently tourists could pay $200 to have a photo taken beside a panda but too many diseases were passed across and some pandas died so fortunately this practice stopped. It was crowded 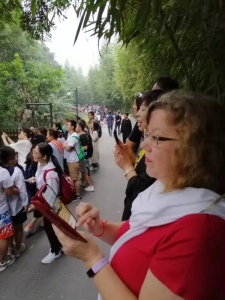 But not too bad in places

Fascinating facts:in 1984 China stopped giving Pandas away and instead only loaned them. This means that all pandas in zoos and parks around the world technically belong to China. Adelaide Zoo for instance has a pair of Pandas and they currently pay AUD 1 million a year to China for their loan. All cubs born overseas also belong to China.

Pandas are the most expensive animal to keep in captivity costing five times more than an elephant!

Panda diplomacy however has been around since the 7th century when China is recorded as giving a pair of the animals as a gift to Japan.

China uses the pandas to improve its image and create relationships with nations able to supply it with needed resources & technology. This has been described as an exercise in ‘soft cuddly power’.

Finally we got chance to send some cards via Panda Post! Yay!