What has Kevin been up to in his retirement while I’ve been slaving away at the rat race, I hear you say?

Well (apart from researching and booking all our little trips) he joined a local football team; Teak Temple FC named after the wooden table in a local bar around which the club was established. This team is not the elite one at the school which the young teachers play in. No, this one has a wider range of ages and abilities and includes people from all walks of the ex-pat community. This has had the added benefit of broadening our social circle and allowing us to step out of the school social bubble. The chaps there have also proven to have invaluable local knowledge and tips for great places to stay. 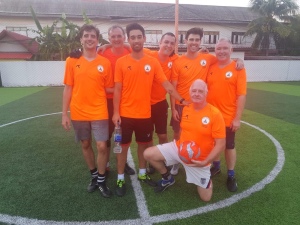 So Kevin disappears every Thursday evening to kick a ball around an extremely hot and humid field (rather him than me!!!) 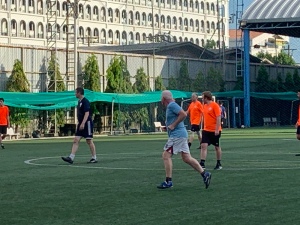 If I am honest the others do more running and kicking that he does but they all do their fair share of post match beer drinking in Charlie Browns Bar until the wee small hours of the morning.

And then there have been the weekend tournaments which have taken him further afield in Thailand to places which we would never have visited and where he stays in salubrious establishments where he gets not tea/coffee in his room but a single pot noodle!!!

The last tournament was last weekend in Korat and Kevin was thrilled when he actually scored in the penalty shootouts. Here he is receiving his certificate for his ‘debut penalty’… bless 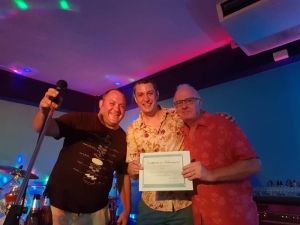 Accolades from the team on his leaving do included:

a member of the Teak Temple FC hall of fame;

the Godfather of the initiation round;

one of the nicest blokes I’ve ever met;

a mighty round buying prowess

an inspiration to never hang up the boots;