One of the joys of traveling is being able to visit new and exciting places. On the whole these tend to be sacred spots, buildings of cultural, historical or religious significance or areas of outstanding natural beauty. But just occasionally you have a day like today. One which reinforces the brutal side of unfettered power, the cruelty of a totalitarian regime and the sheer horrors of man’s inhumanity to man.

The killing Fields of Cambodia

I have to admit to having an initial internal debate about the ethics of visiting this site before we left. Was it basically commercialization of genocide? Was it Disneyfication of the macabre? Was it wrong for us to visit?

Visits to the site have increased by 8 fold in the last 10 years from originally locals paying their respects to now including far more foreigners than ever. But when we arrived my fears we put to rest. This site, 17km south of the city centre was a respectful, educational testament and memorial. 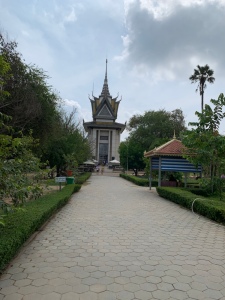 The site is quiet and for a modest entrance fee of $8 (£6.12) which included the audio guide we were able to wander around the site absorbing the atmosphere and learning much.

My knowledge of Pol Pot and his doings were sketchy until the release of the iconic film. I did have the benefit of working with an academic at St Martin’s College, Ian Harris, who has researched into the effects on Buddhism of the genocide and I had heard him lecture. His book is a seminal work on the subject.

This prior knowledge was useful but nothing like seeing the site and experiencing everything at first hand. It was a sombre and moving day which left my heart breaking at times but the victims deserve to be remembered.

In silence we wandered along wooden paths which straddled the uneven earth that had held the mass graves of approximately 9000 victims. Occasionally we heard witness testimonies or listened to the stirring revolutionary music which was played from loudspeakers with the intention of masking the cries of those being murdered. The graves had been exhumed but weather does shift the soil and from time to time more rags and scraps of clothing are exposed along with more fragments of bone. Every few months the caretakers of the site collect them up and put them into glass cases.

The stories which we heard were gruesome and chilling. Pol Pot educated in France had a warped utopian vision of an agrarian communist state. He was reacting against the US oppression when years of bombs had fallen in Cambodia during the Vietnam war. This coupled with a corrupt civil government left the country crippled and ripe for change. Pol Pot recruited young men and teenagers from the countryside. They were uneducated and willing to give unswerving devotion to ‘the cause’ as a promised solution to their woes and thus the Khmer Rouge was born.

Pol Pot basically led the world’s biggest offensive against the intelligentsia. Anyone who was a professional, could speak a foreign language, had soft hands or wore glasses was deemed the ‘enemy’ and had to be eradicated. In total 1/4 of the Cambodian population was executed in a 4 year period.

Pol Pot did not have a rich country and bullets were expensive so the killings were all from starvation, disease or brutal beatings with sticks, hoes or other farm implements. This was quicker and easier.

There are over 300 killing field locations throughout the country many of which have been left undisturbed. In this site though the bodies have been exhumed, catalogued and the bones displayed in a memorial stupa to stand as a testament to the atrocities and serve as a reminder to future generations of the folly of such regimes. I was reminded of the saying, power corrupts and absolute power corrupts absolutely. 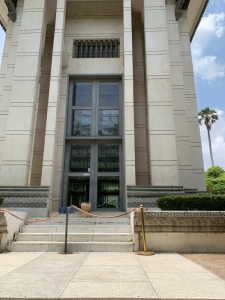 In the calm sunshine we meandered past the sites of sheds which had been demolished which had contained the chemicals used to mask the smell of the decomposing corpses. 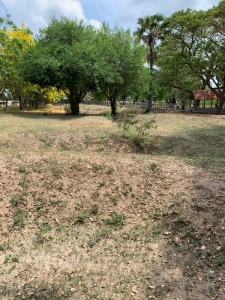 Below us were shallow trenches which had each contained the bones of up to 450 people. We could imagine the fear that the 300 people each day felt as they met their deaths. Many of them had endured weeks or months of torture at the S21 prison before giving false confessions. Perhaps they felt that death was a release from their suffering. All the executions were conducted at night time.

It was all very sobering but perhaps the single most upsetting part was the tree festooned with colourful ribbons and bracelets. Here soldiers took infants by the feet and smashed them against the tree in front of their mothers who were then raped, murdered and thrown into the pit. As a mother I cannot bear the thought of what those women suffered. Words fail me at this point and I can only say that we offered prayers.

S 21 inside the city was originally a high school which was closed down as all education was forbidden and was taken over by the Khmer Rouge as a prison in 1975. Here classrooms were converted into torture chambers and some of the photographs inside were quite graphic. One thing which a totalitarian regime does very well is to document all its crimes very efficiently. Many of those captured and brought here were just kids.

Thousands were killed for being ‘new’ people not the simple countryfolk which the revolution aspired to. But even these ‘old’ people who were gathered into farming collectives were slowly being starved. The quota for rice production was tripled and those sent from the cities as forced labour had no idea how to farm. All Cambodians had to survive up to 13 hour working days on as little as two bowls of rice soup a day. Any excess rice they produced was sold to China so that Pol Pot could buy weapons!!! It beggars belief that anyone could think that working his entire country to death was in any way a sensible or sustainable option!!!

Men have a track record throughout history of being power hungry, violent war-mongers. This part of our visit here really drove that home. Most of the time that fact is distant, idolized in legends or glorified. But the stark reality of the consequences of genocide were before our eyes. We must not forget.

This is the logo of the International Women’s Peace Group and their exhibition at the end of the day gave a sliver of hope. They are working to bring an end to areas of conflict and violence throughout the world.

Many members of the Khmer Rouge returned to society and now live normal lives. There were simply too many of them to track down and prosecute. Very few have been punished for war crimes or crimes against humanity. The Cambodians have accepted this. I found it hard to come to terms with that fact but there is a saying here

‘We forgive but we don’t forget’

One survivor we heard said,

‘When you hold hatred in your heart you hurt only yourself’

Such wise and humbling words.

As responsible tourists we have to see the bad alongside the good and the magnificent. We need to remember the atrocities to ensure that history does not repeat itself. The final words of our audio tour urged us to be ambassadors and to bear witness to the reality of what happened here to try to prevent it or anything like it ever happening again.