Greetings from New Zealand. This is the perspective from the bottom of the world. Fascinating.

The long haul was totally worth it though as this is a country of stunning scenery. It is like a home from home as everything including the weather is so familiar. In fact wandering around Wellington city centre At 10pm reminds us all of Bournemouth. You also can’t get anything to eat there at that time on a Sunday!

Actually Wellington is known for it KBT (kiwi bed time) as they all do hit the sack quite early. Mostly everyone is up with the lark and off making the most of the sunshine.

Our day began with a delicious breakfast of coconut chia with fruit. Photo included here especially for Jane Robinson who is responsible for introducing me to chia breakfasts. Jane you would have loved this! 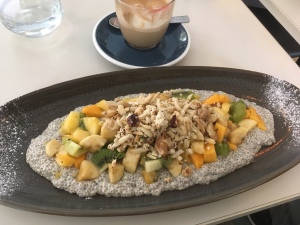 After that it was a tour of the WETA studios. A weta is a type of insect native to NZ, a cricket type creature which comes in an assortment of sizes, some as large as the palm of your hand! It is an ugly NZ monster.

It specialises in puppetry, prosthetics and props such as weapons and armour and digital manipulation such as CGI.

The studio began with a couple who worked out of their flat and who were friendly with a young film maker called Peter Jackson. Three Lord of the rings and a Hobbit movie later and they are world renowned players in the movie industry employing over 2000 staff.

The tour was fascinating as we learned about how things are made. But we weren’t allowed to take many photos. Here are a few that we could take. 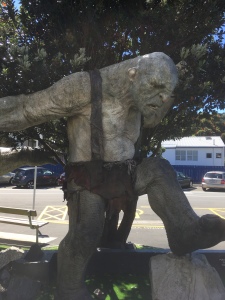 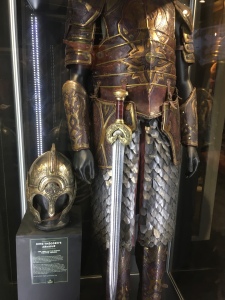 Kevin thoroughly enjoyed himself As you can see.

I can’t wait to see Hobbiton.

The weather here is exactly like a U.K. summer. The temperature is in the mid 20s and it’s windy. It is T shirt weather when you are in the sun but chilly in the shade. 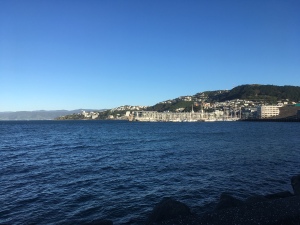 Our next stop was the national museum where were saw an amazing display about Gallipoli with award winning giant sized models made by the Weta studios. 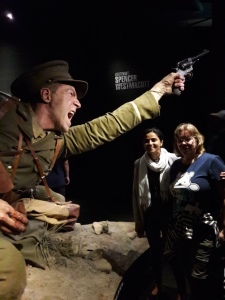 This was Lieutenant Colonel Fenwick (a family name for us)

The Maori exhibits were fascinating and we have much to learn about this culture. Although it was embarrassing when Hanifa replied to kevin in a loud voice that she didn’t like kiwi 🥝. ‘You can’t say that here’ whispered Kevin and we fell about laughing. 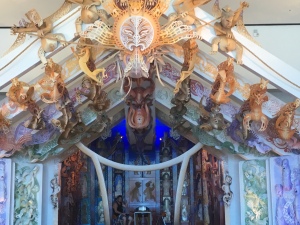