2 hours west of Bangkok is the provincial town of Kanchanaburi. Here we visited the museum of the infamous Death Railway.

In 1885 a survey conducted by the British advised against the completion of a Siam-Burma Railway due to technical difficulties and a lack of labour. In the Second World War Japan however, had other ideas and very much needed a rail link to be able to move their army around Japanese controlled South East Asia by connecting all the existing rail networks. They had a brilliant young engineer and a labour force of 61,000 POWs and 250,000 conscripted Asians (romusha) or forced labourers. It was a project, the completion of which, defied all the odds.

Work began in September 1942 and was scheduled to finish in December 1943. The project required the building of 600 bridges in total and 9 of those were long span. We have the film to thank for immortalising just one of those structures- The Bridge over the River Kwai 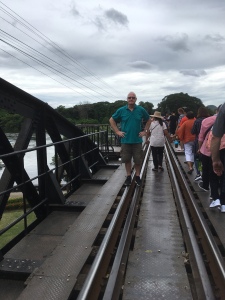 And having seen the film, it was a special moment when we stood on the actual bridge itself. The two end spans are original but the middle section was bombed and so is a renovation. What was fascinating to us was the documentary in the museum where an elderly Japanese man was quite indignant about the film’s portrayal of the Japanese needing British engineering assistance to complete the bridge. He said that was not the case AT ALL. The Japanese knew exactly what they were doing. But… hey ho the victors write the history…

Apparently although the conditions were hot and humid the now infamous brutality from the Japanese did not begin immediately. In the first year there were 243 allied deaths as compared to over 4000 in each of the subsequent years. It was only when pressure to complete the project was exerted from the Japanese High Command that the pressure was passed down the ranks.

This extract below brought home the conditions of the men … 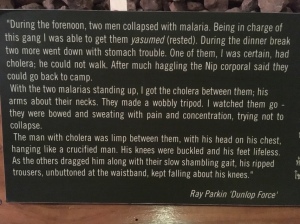 It was an interesting point that no army uses its best soldiers to guard POWs. It tended to be brawn not brain or in this case, conscripted Korean soldiers who were treated brutally themselves and who took their revenge on the prisoners.

The cemetery outside (one of three in the area) had nearly 7000 headstones and was where we had a few moments of quiet reflection. Some of the graves simply said ‘A soldier’… 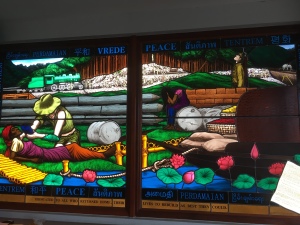 The Railway itself runs for 258 miles and we travelled to its termination point at Nam Tok, a journey which took 2 hours. 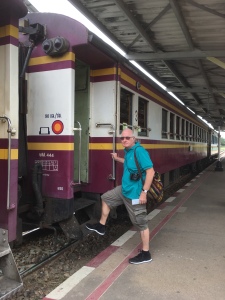 The views from the open windows were stunning and well worth being wind-swept for. 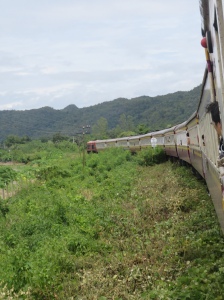 At the end of the war the Allies removed the last sections of the track so that the line would not stand as a testament to Japanese engineering and Hellfire Pass is now maintained by the Australian war graves commission as a monument to those who died during its construction. Again this was a somber and moving place to be. Original sleepers and tracks can be seen in our path as we walked along through the jungle.

And dotted along the track were original tools 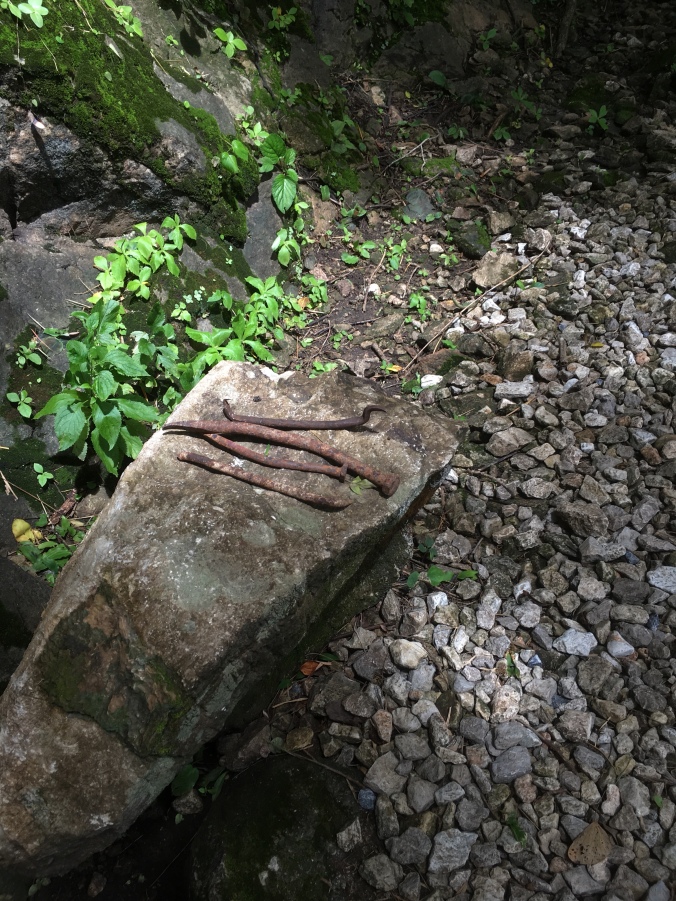 The cutting was constructed without any power tools or machinery. Men worked in pairs one held the spike & the other hammered it into the rock. Quarter turn then hammered again until there was a hole big enough to put a stick of dynamite in. After the explosion others carried the debris up the embankment which got steeper & steeper the deeper the work went.

Men had to carry their tools to & from the site so tried to get the lightest hammer even though it was less effective. As pressure to complete was brought to bear men worked 15-18 hours a day on only one meal. They batted malnutrition and disease under the threat of severe beatings. By the end of the war 12,800 Allied soldiers had died working on the railway but what we don’t often hear about is that 90,000 of the Asian workers also perished under the same conditions.

Historians have calculated that 38 POWs died for each kilometre of track that was laid.

We will remember them.