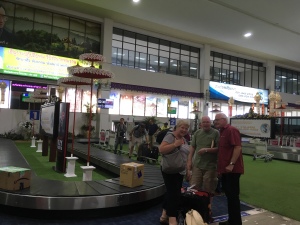 I have to say that from the outset this trip with the Toner rellies has been stunning. After a very pleasant flight we landed at Chiang Rai airport only to find one of the most beautiful baggage claim areas that I have ever seen. What you can’t tell from this photo is that there was also a 6 piece Thai band playing welcoming music too. We weren’t sure if they always did this or if there were important dignitaries arriving due to the world media attention on the rescue of the boys from the cave.

My overall impression of Chiang Rai is one of colour. Our first port of call was the acclaimed White Temple 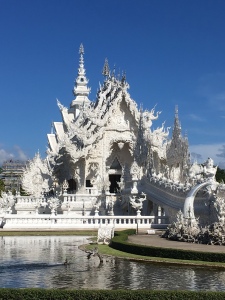 This stunning modern temple was designed and built by a local artist called Mr Leung (his nickname). He made his fortune as an artist then decided to give something back to his home town. By funding the entire project himself he has ensured artistic control. Every detail is all down to him and it was a wonderfully symbolic experience.

Firstly at the front are various images which graphically depict hell. I particularly liked the grasping hands, some with bowls imploring you for help. Other sections are just contorted ugly faces. 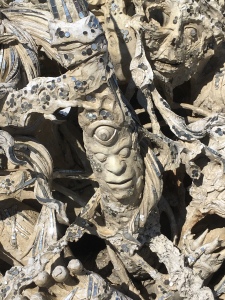 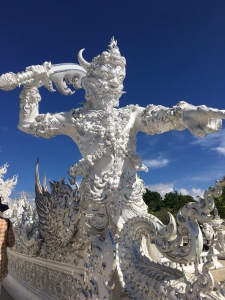 Inside you see a mural on the back of the entrance wall depicting the mouth of hell. Interestingly this contains images such as the twin towers, Pokemon, superheroes and other trappings of modern life which prevent people from seeing the truth about the environment or themselves. We couldn’t take pictures but this is a detail scanned from the guide book. 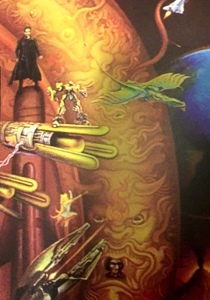 Here you can see Manga and the Matrix and a transformer!! At the top of the wall are two demon eyes each containing a face. On the left is George Bush and the right is Osama Bin Ladin. Facing them are two Buddha statues one in gold and one in white representing the way to heaven and spiritual freedom. It was really quite moving.

In this part of the world temples are usually opulent edifices of gold symbolising wealth and splendour but this temple goes against tradition and is all white because Mr Leung felt that wasn’t what Buddhism should be about. He used white to represent purity and the effect is magnificent. He has used gold but only on the toilet block (which is now the most splendid place I have ever had a wee!!!)

Then it was onto the work of another local artist who favours the colour blue. Unsurprisingly this one is known as the Blue Temple! 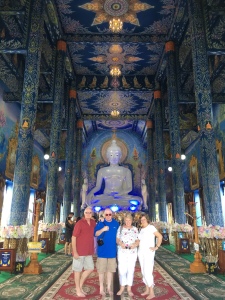 Check the ceiling out folks!

After that we visited the work of another local artist. He had not been encouraged by his family to pursue an artistic career so he had had to support himself through art college in Bangkok by living in empty properties where there was no electricity for his studies so under the influence of all the darkness his favourite colour to work with was black.

A short drive away and we came to the Golden Triangle which is a confluence of two rivers (Ruak and Mekong) and the border between three countries: Thailand, Laos and Myanmar. 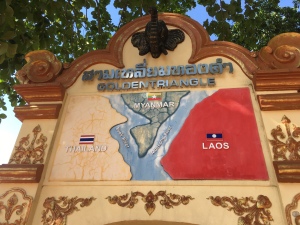 It is know as ‘golden’ because much money (gold) has changed hands here as part of the drug industry. And so next we visited the Opium museum (who knew that one even existed!!!) 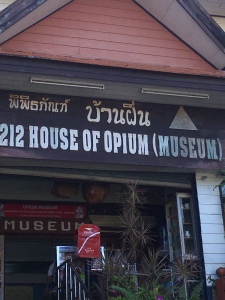 Poppies look so pretty but are the cause of so much suffering. Legend has it that a village woman was so ugly that no one wanted to marry her. When she died she claimed that two flowers would grow on her grave, one was a tobacco plant and the other a poppy. Before she died she prophesied that one would bring great pleasure but also great tribulation (she wasn’t wrong there!)

We finished the day off in a local food market where they tried but failed to persuade me to eat either silk worms or crickets!!!! 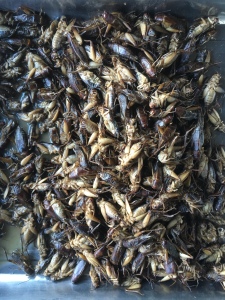 On the drive back we passed fields of pineapples. They grow really tiny sweet ones here

This picture is of lychee trees and underneath are coffee plants. The coffee grown here is Arabica which is very smooth and mellow and not high in caffeine.

These are the tapioca plants which look remarkably similar to marijuana (I’ve been told!)

Tomorrow we are all taking the bus to Chiang Mai to see what that has to offer. Whatever it is certainly won’t be as colourful.