Half term break for us is more of a long weekend than anything else so we decided to explore the ancient city of Sukhothai which is 230 miles north of Bangkok.

Bangkok Airlines are the only people who fly there and they built the Sukhothai airport. It was very much like Koh Samui with a traditional Thai open plan design. I have to say that the runway is the most beautiful one that we have ever landed on being bordered with colourful flowers. 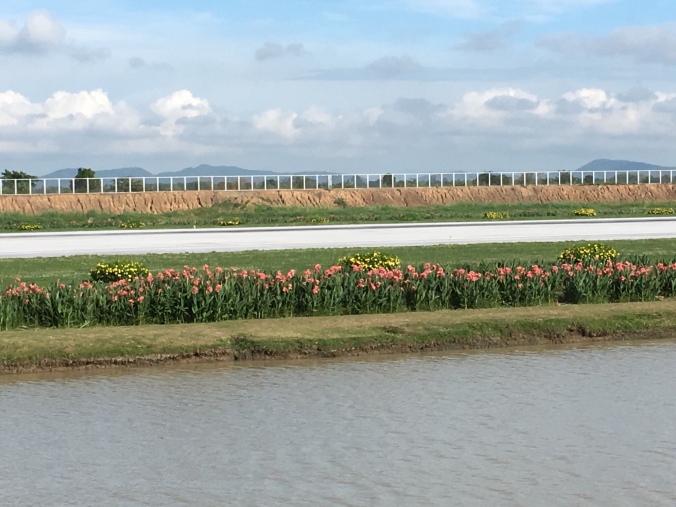 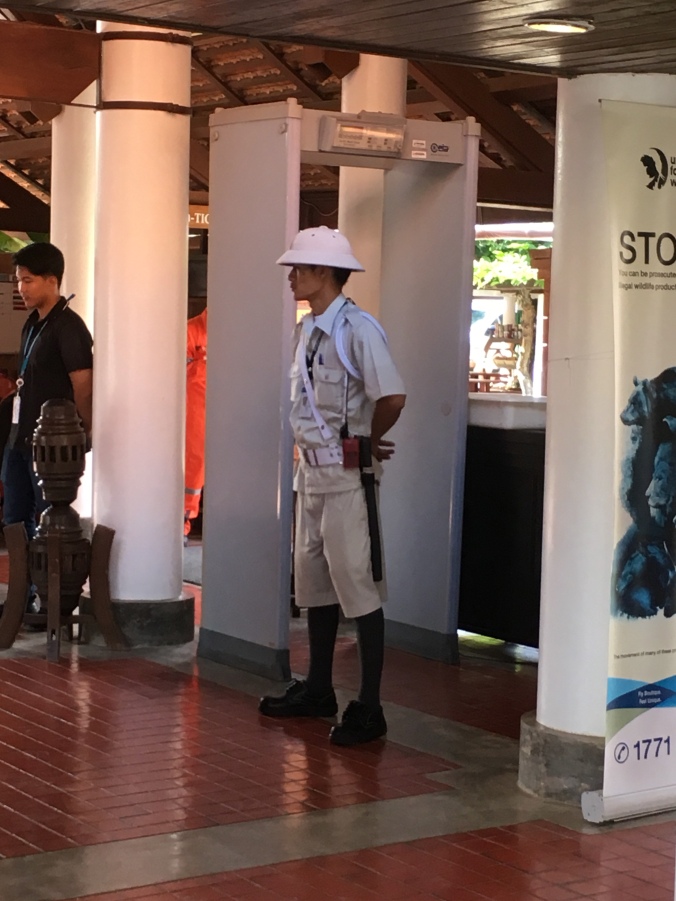 And outside we were greeted by a herd of zebra (what else!) Then to our surprise (the zebra strangely seemed quite normal) we saw life sized dinosaurs. Lots of them. 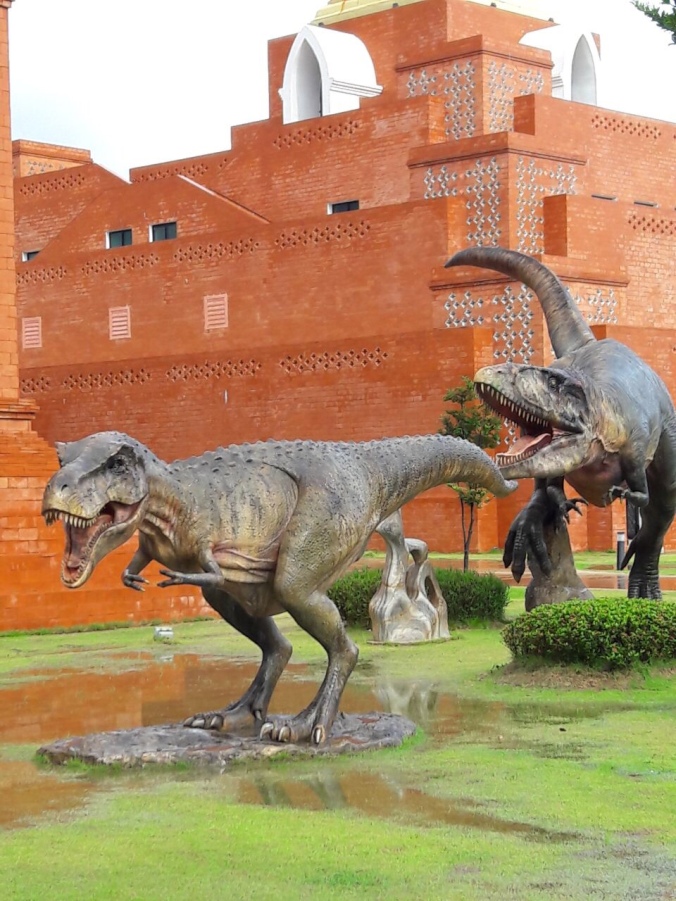 They didn’t appear to be part of an exhibition so we concluded that they must be additional security (idea level: genius)

Personally I think that Manchester Airport could be greatly improved by the addition of multiple large dinosaurs stationed around the perimeter! Just a thought.

Sukothai itself was the capital of Thailand in the 13th century and the walled city housed a number of temples and shrines reflecting various cultural influences from Cambodia or Sri Lanka – all now carefully preserved and a UNESCO World Heritage Site. 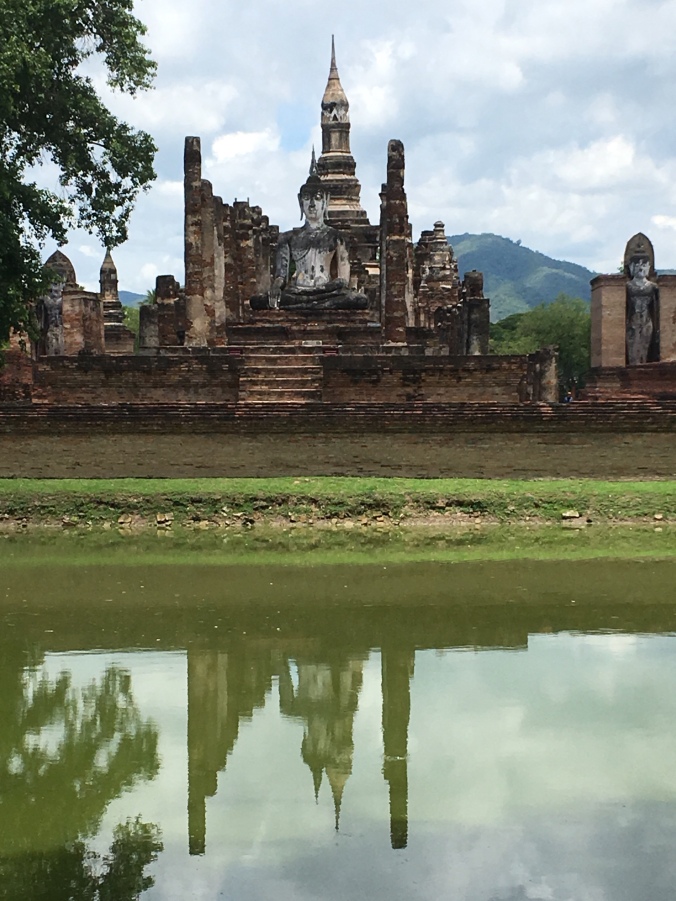 It was extremely calm and peaceful 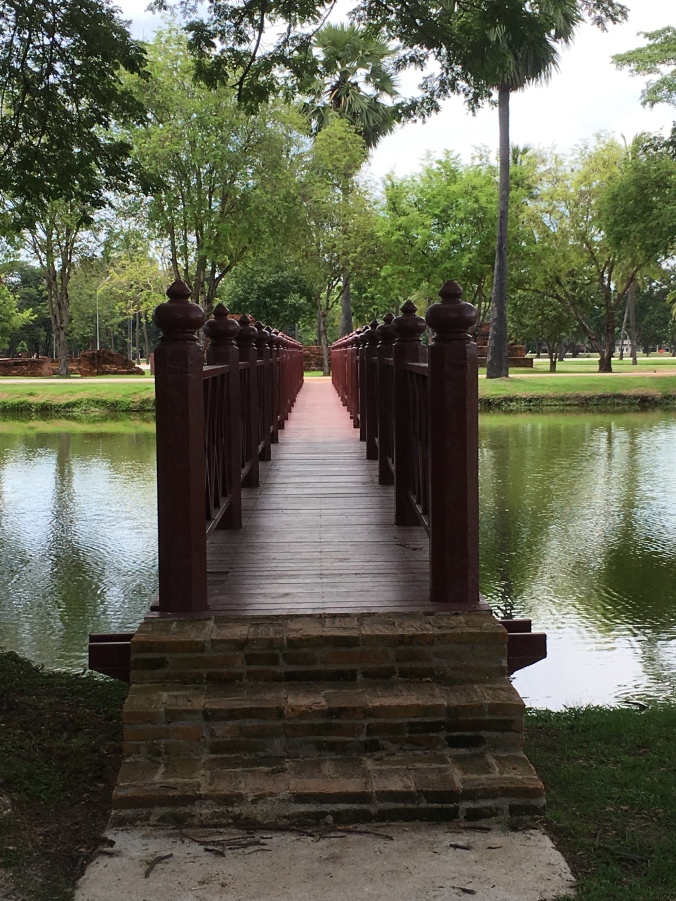 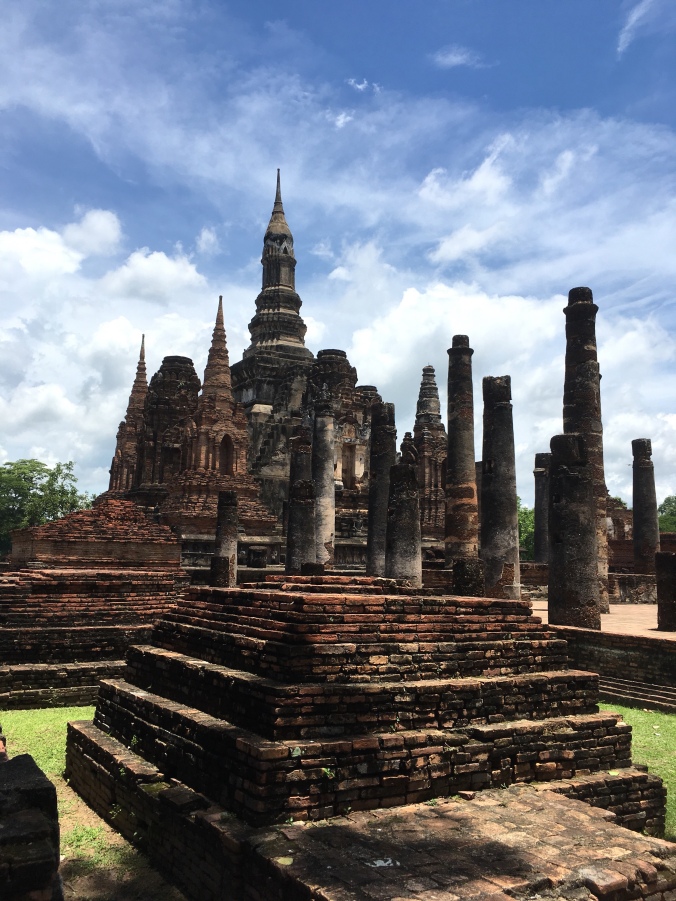 But you could imagine how busy and bustling it must have been in its heyday. 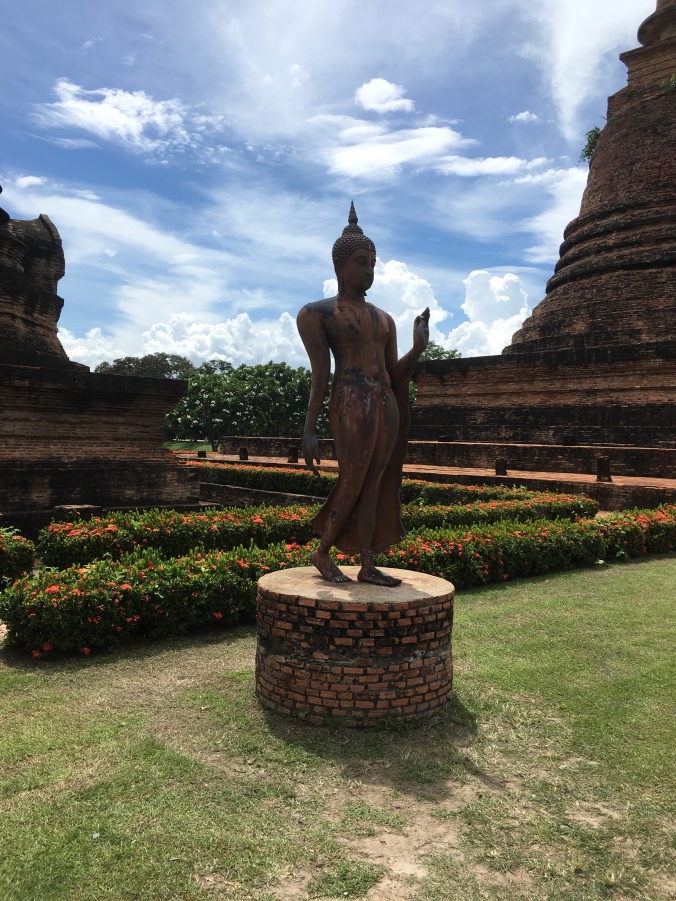 We hired bikes for a couple of hours at the exorbitant rate of 70p each. Even in the sweltering 36 degrees heat it was preferable to walking… 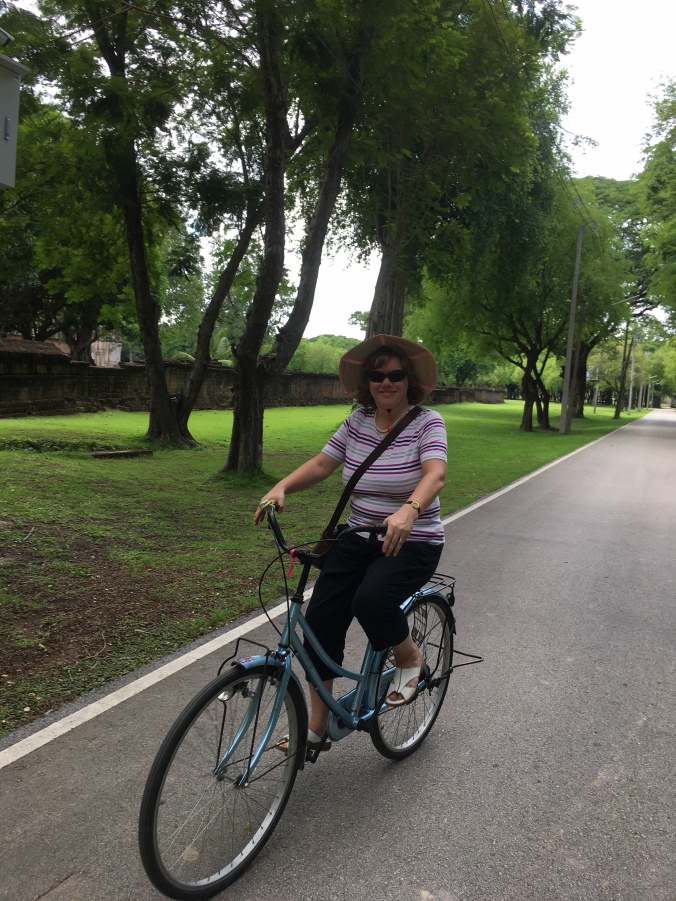 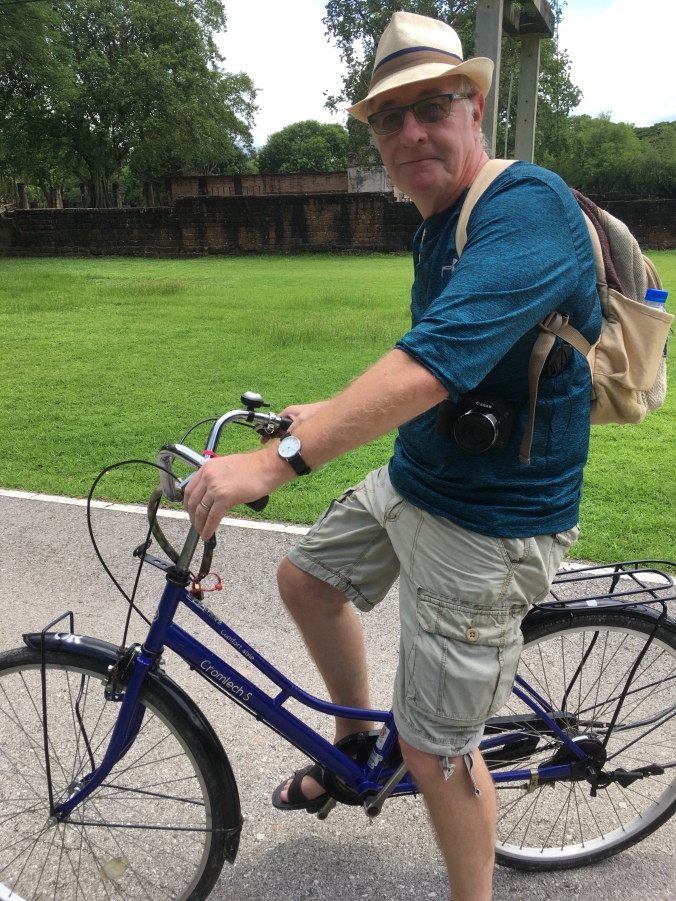 The box hedges were so pretty with their bright orange flowers 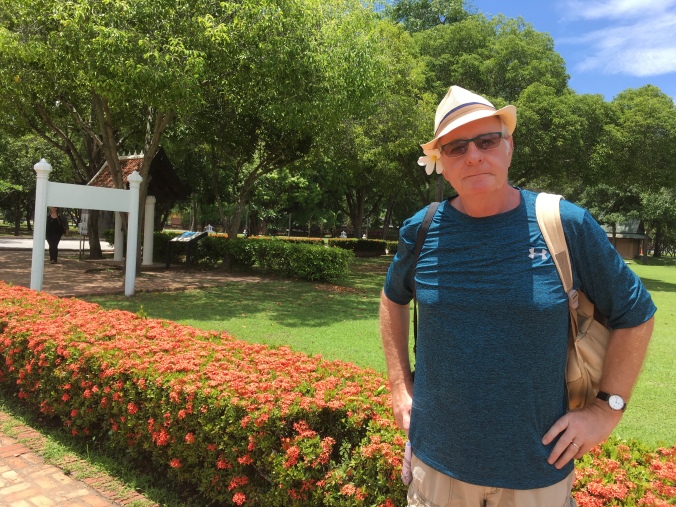 They matched the robes of the visiting monks! 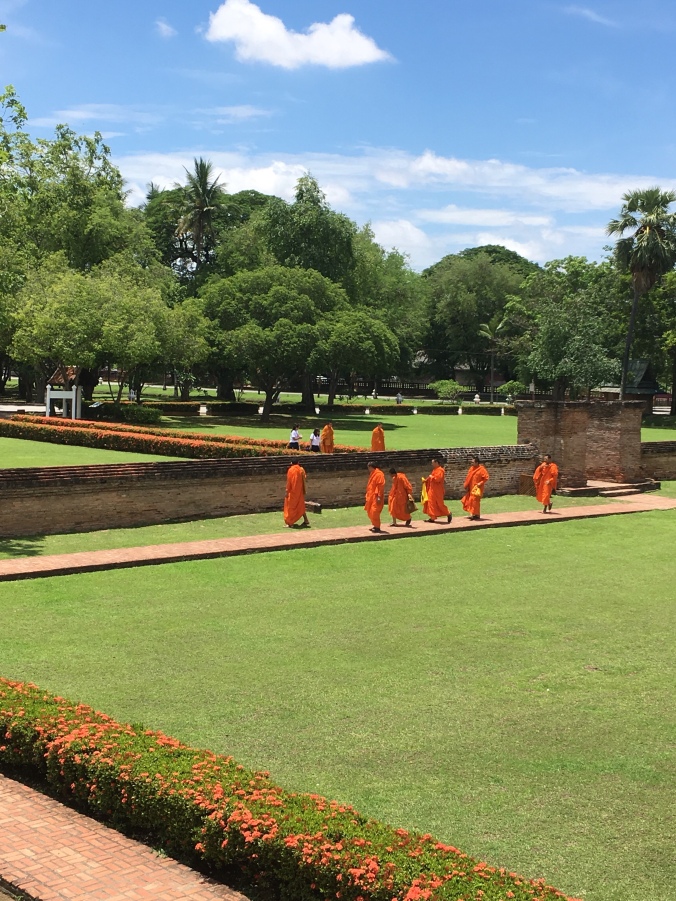 They even do trees in the same colour scheme 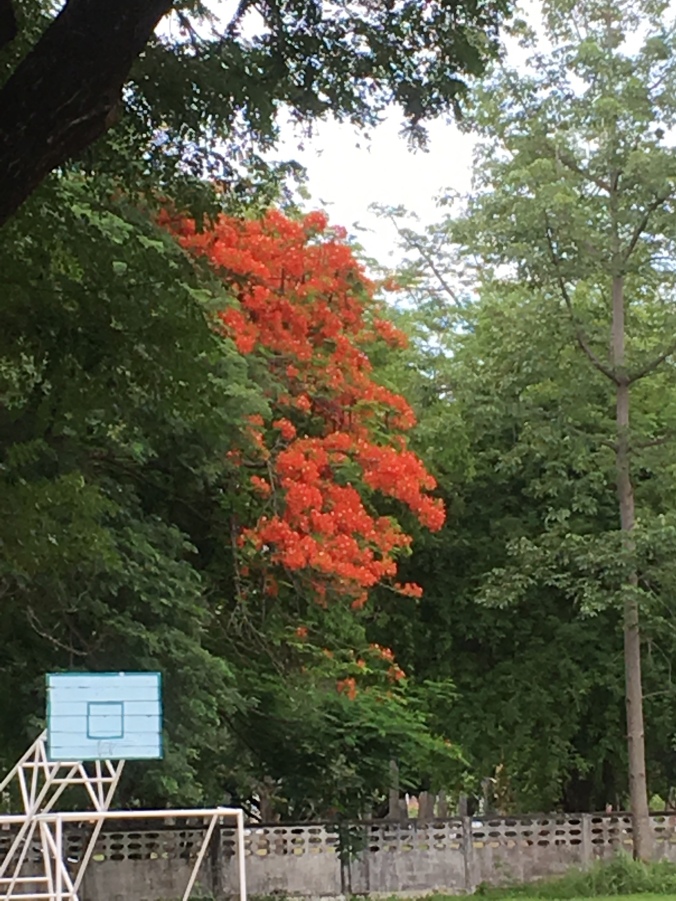 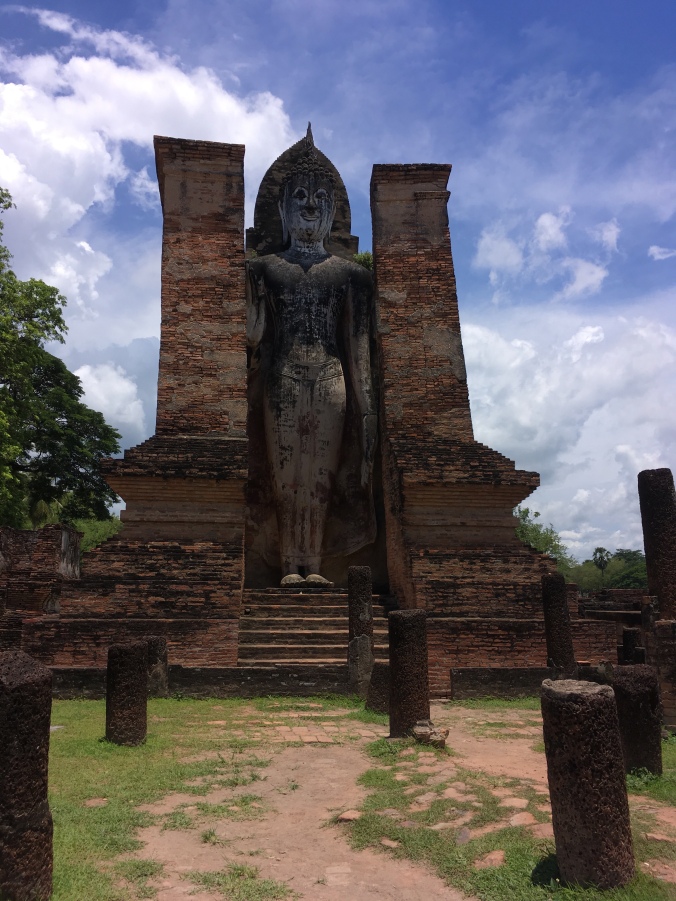 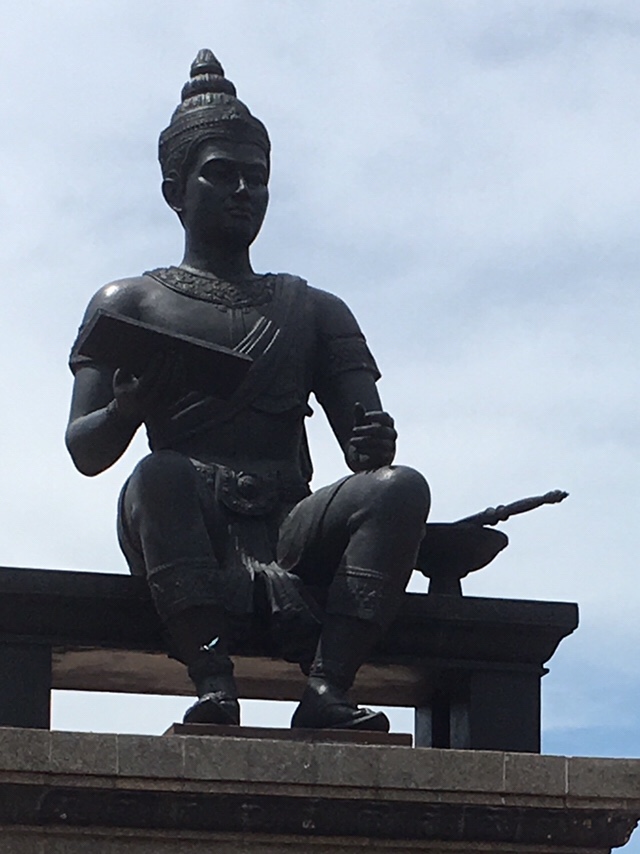 I loved the details on the base of the Chedis or Stupas. It’s not often that you see the monks depicted. They are processing around the shrine in a ritual called pradaksina very like the prayer wheel circuits around Stupas in Nepal. 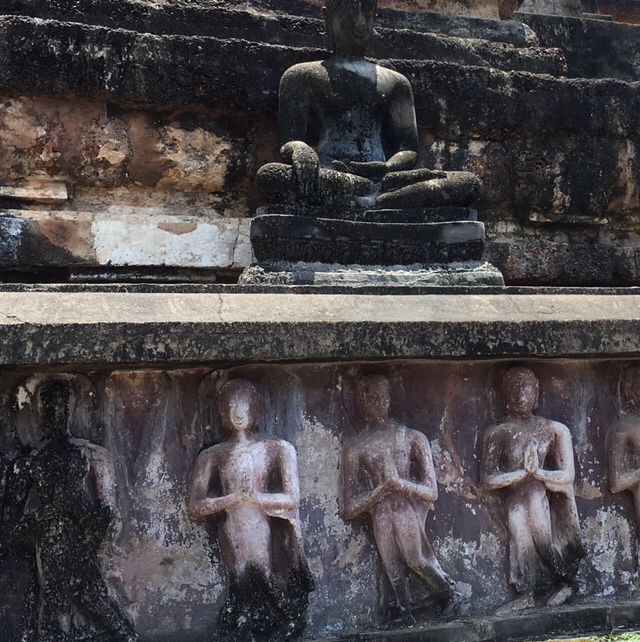 And this Wat is called Chang Lom or ‘surrounded by elephants’. You can see why. 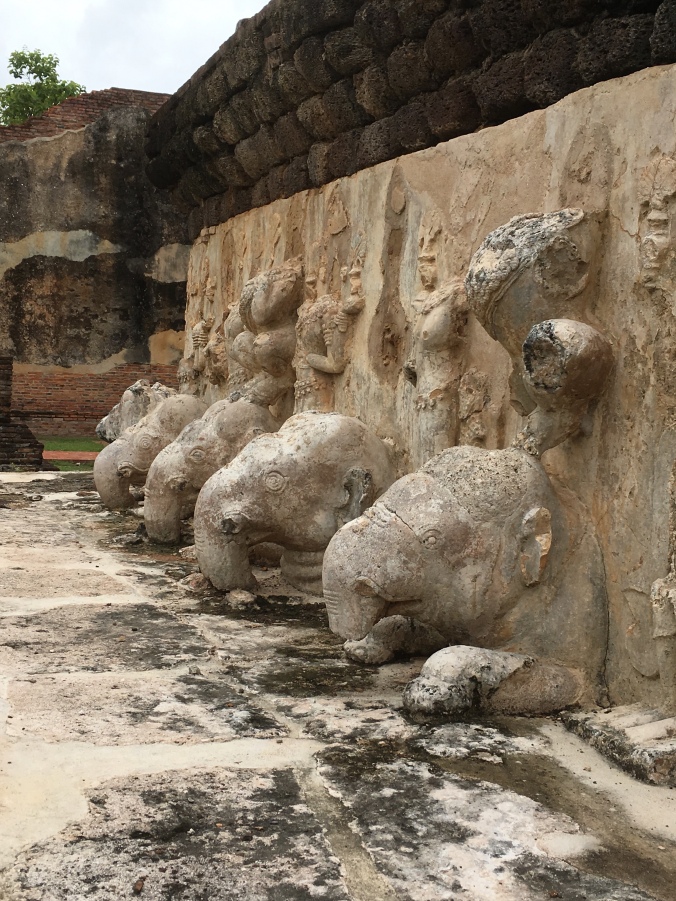 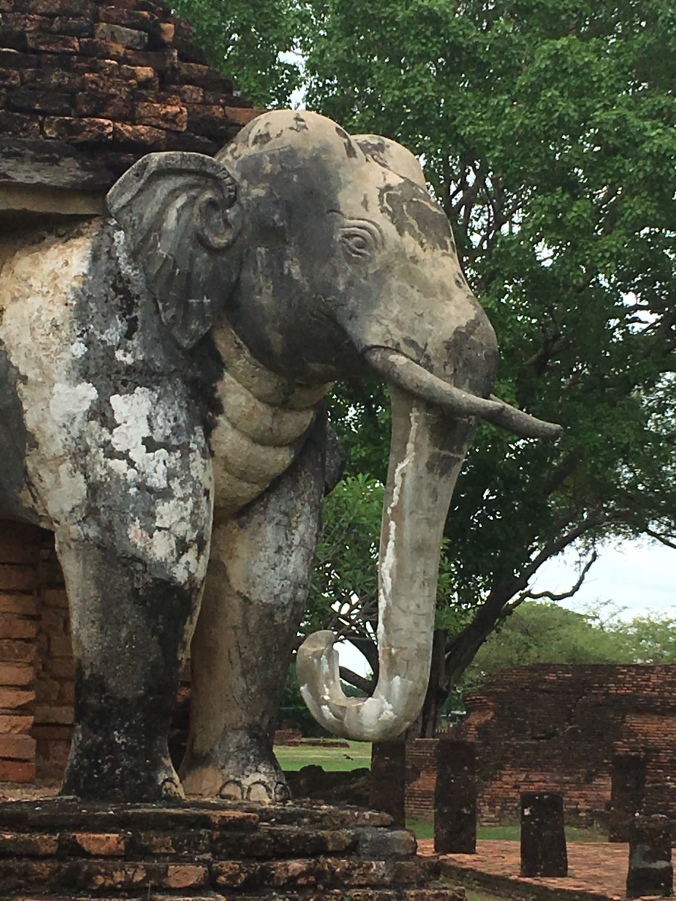 The whole place looked stunning at sunset when it was illuminated 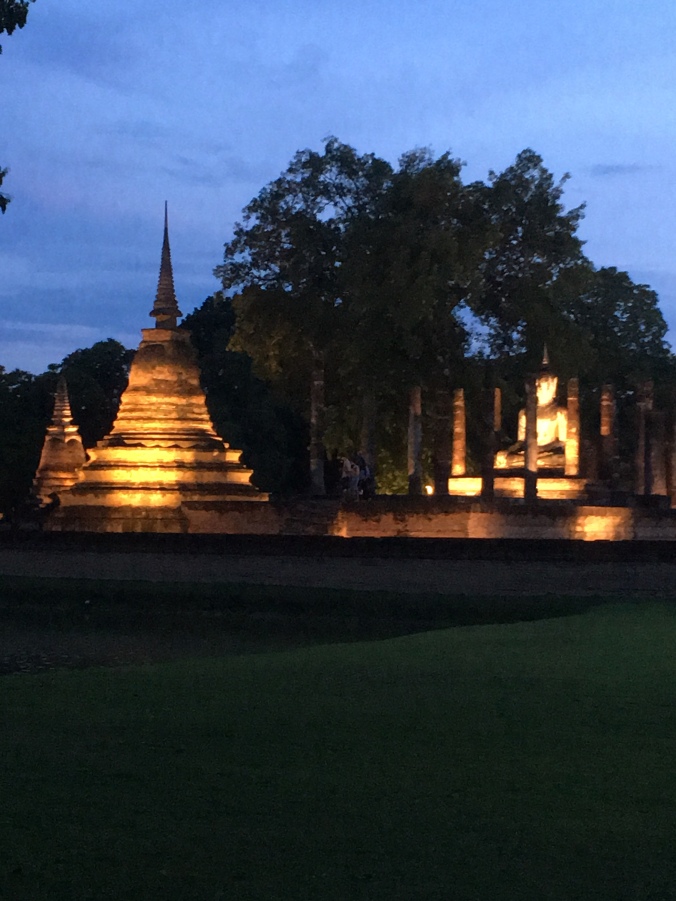 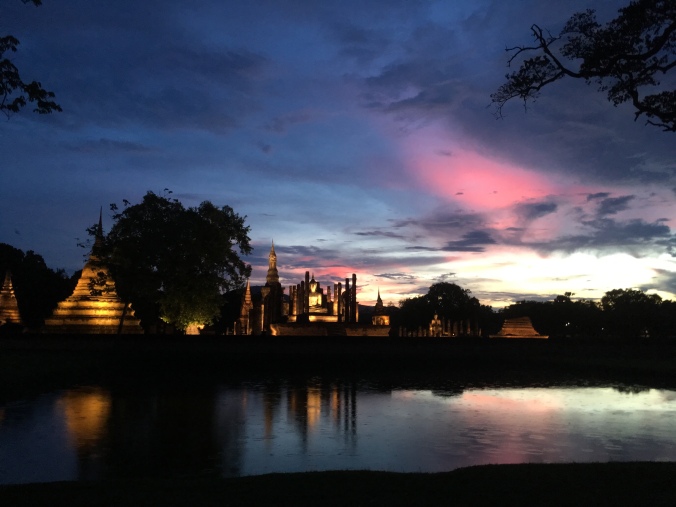 Today we splashed out another 70p and hired more bikes. This time we rode for about 10k (half killed me in the heat!) but it was worth it to see the countryside. Many of the temples are nestled in shady forest clearings or up slopes outside the city walls. 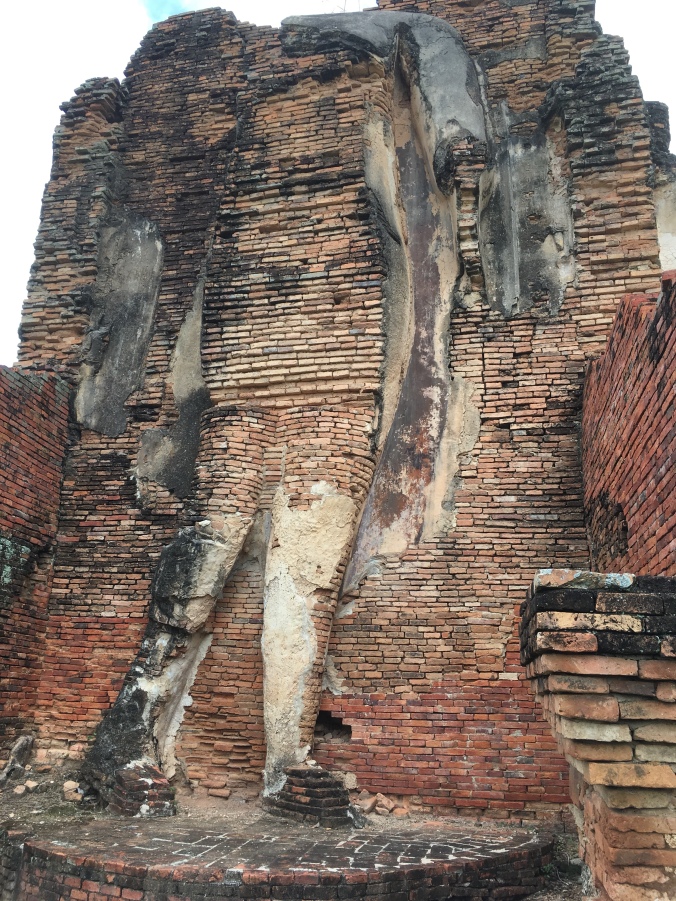 This is a big Buddha hidden in a large structure which has been lovingly restored in the last 50 years. 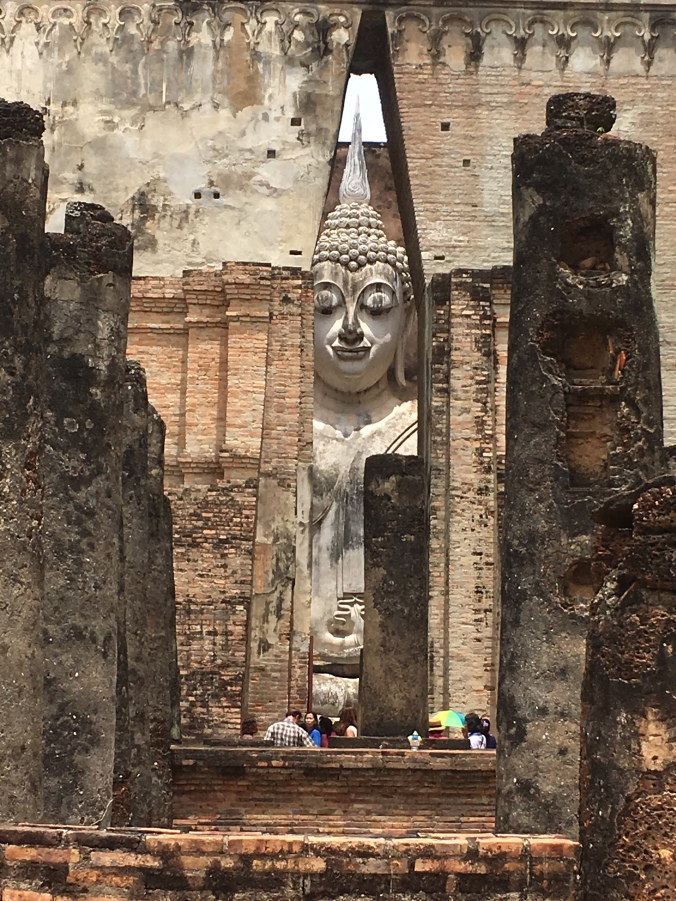 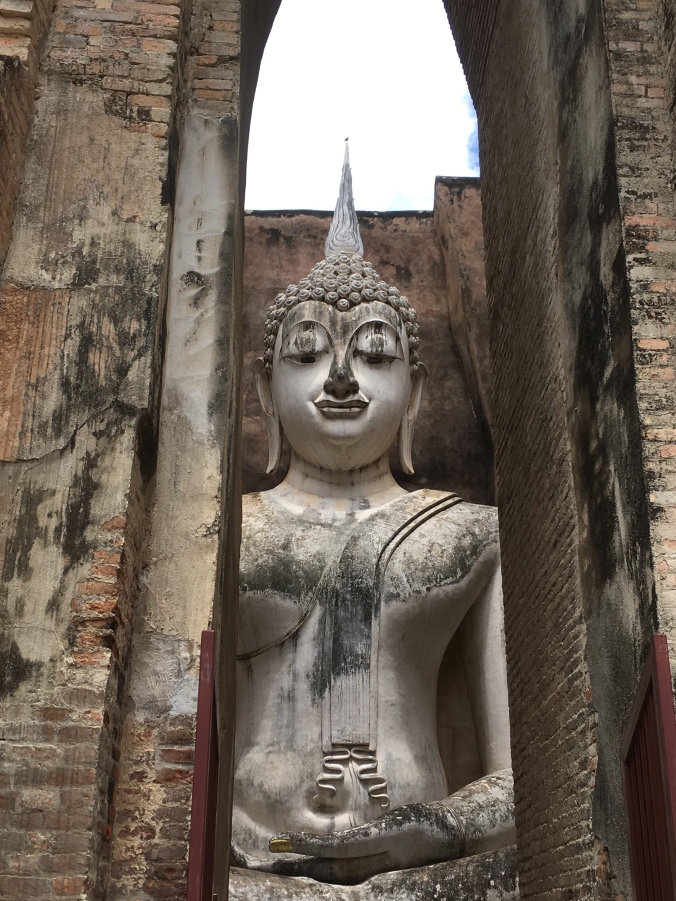 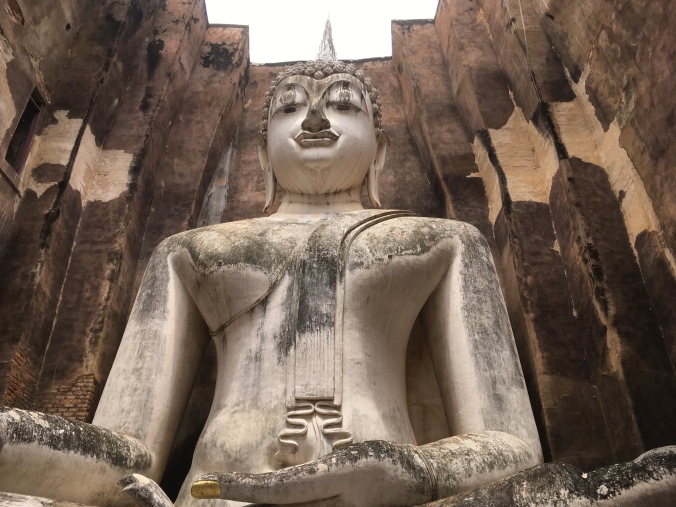 At the back was a pond with enormous flowers which clearly had been the inspiration for Wyndham’s iconic book The Day of The Triffids! (We didn’t get too close) 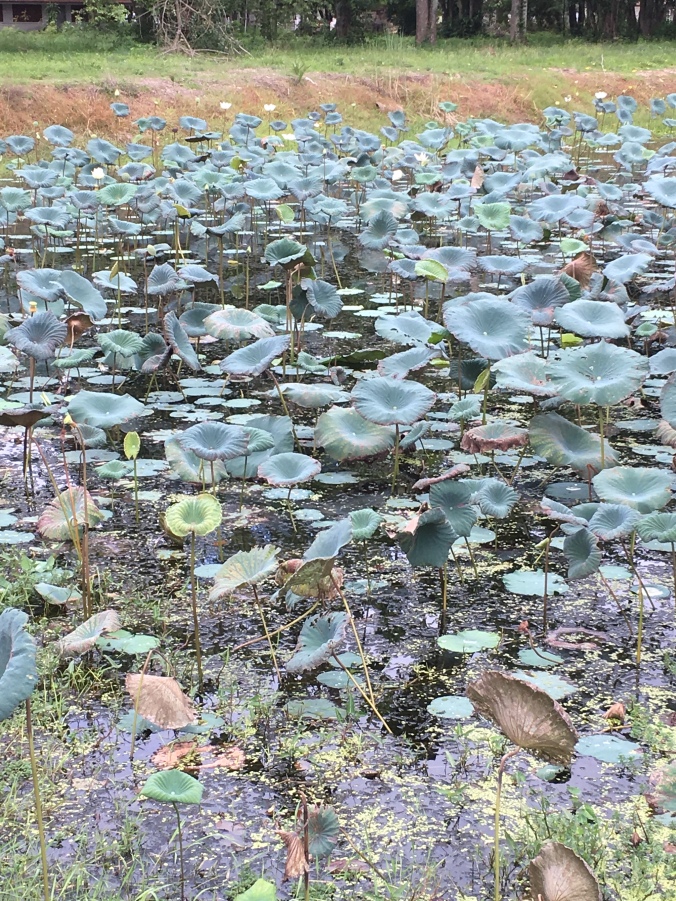 Some plants were incredible. These weeds were growing in cracks and were just stunningly vivid. 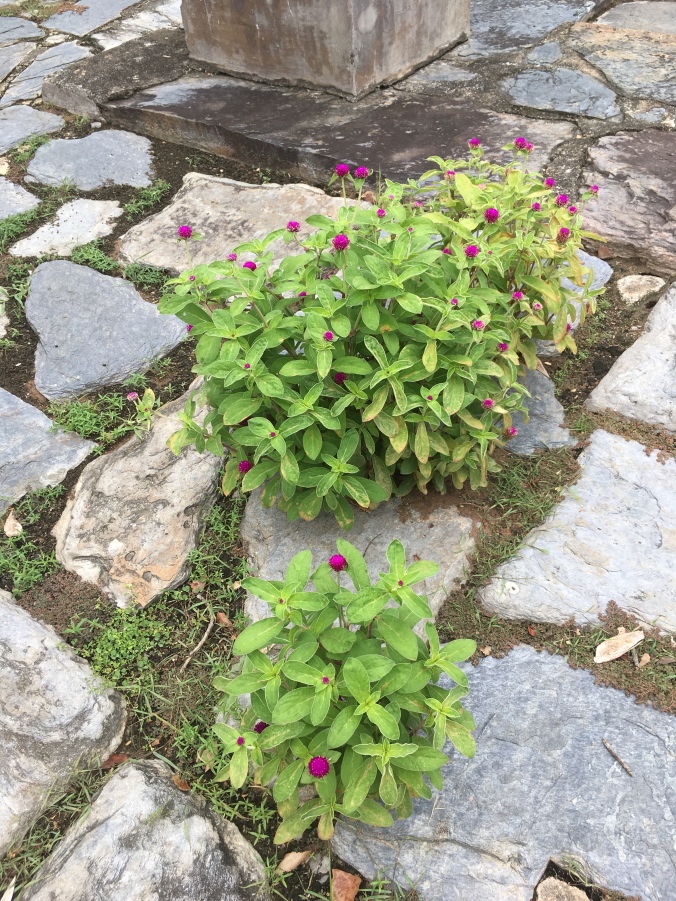 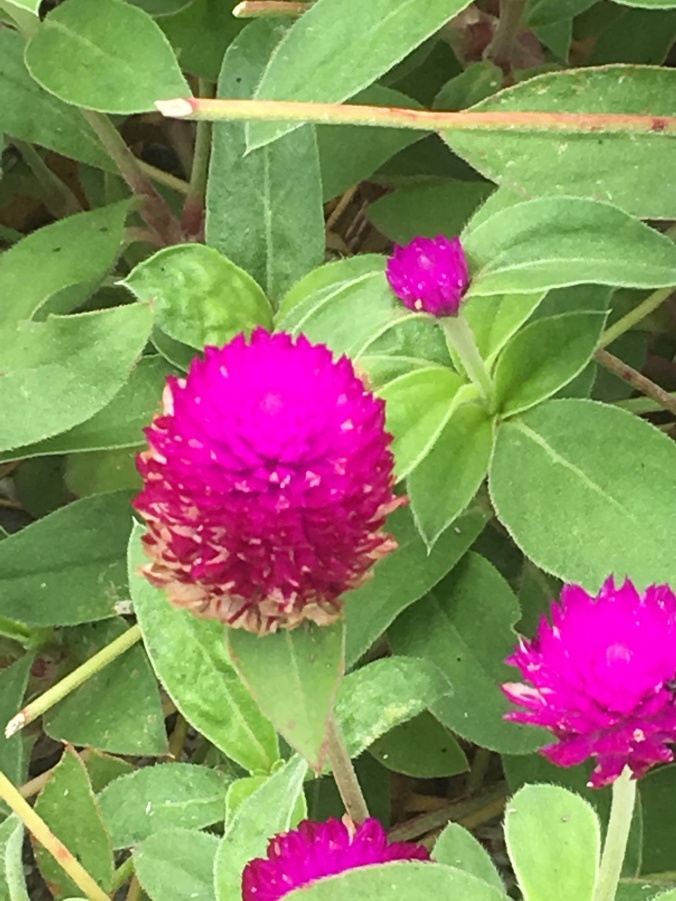 We were intrepid enough to scale the 300 metres to this lofty temple in the mid-day heat (mad dogs and English men sprang to mind at this point) the raised rock wall was in fact the path and the stones weren’t all that level or safe! 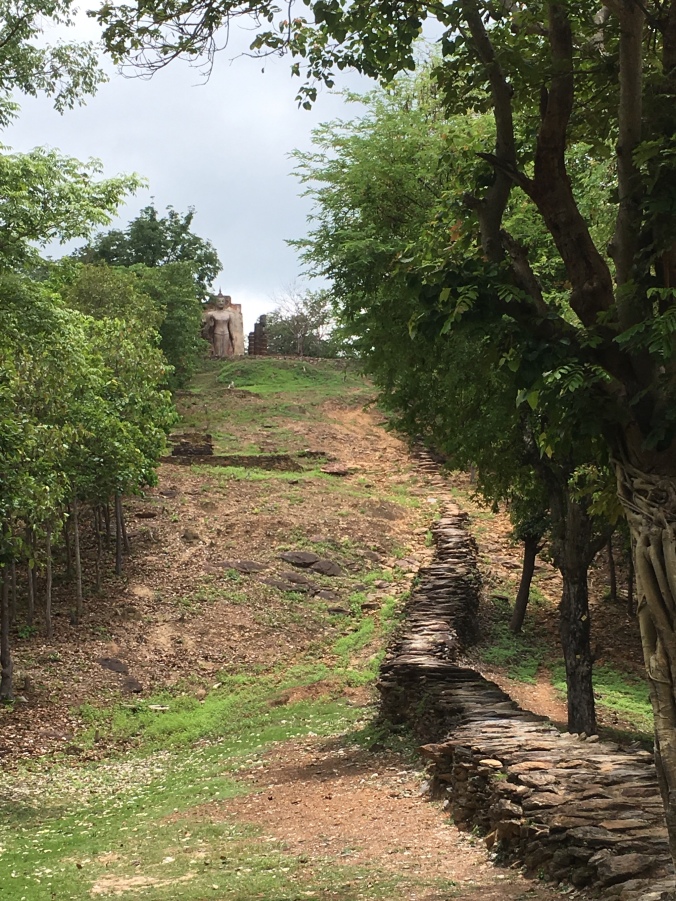 Ok it doesn’t look that bad in the photo but it was!!!

Overall it was very pleasant as there was next to no traffic and zero inclines! I was very pleased to have done some serious exercise. And naturally the rehydration with a large Singha was exceptionally pleasant too.