So we arrive in the capital of Cambodia Phnom Penh on our round SE Asia trip. And it is HOT here. It feels hotter than anywhere else we have been so far. As a result we are having siestas in the mid day heat and seeing sights in the morning only. Even then we very quickly get completely drenched in sweat! April in Cambodia is not for the faint-hearted.

First stop was the Royal Palace. The king is 65, unmarried and lives here with his mother. Good catch there ladies. The blue flag shows that he is residence today. This was for a special New Year ceremony where he makes an offering of fruit to the gods. And Fanta, apparently the gods like Fanta and Sprite.

King Norodom Sihamoni Was formerly a monk and then a professional dancer and has a PhD in dance (who knew that?) from Prague where he lived for 10 years. 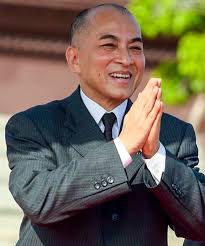 He has a moonlight pavilion which has no electricity and no roof so is open to the sky where he holds dances.

The Khmer dynasty began in 802 AD and flourished for 600 years. In 1863 Cambodia came under the governance of France from which it gained independence in 1953. Then came the Vietnamese war and the country was heavily bombed by the US. In 1970 the king was overthrown and the right-wing Khmer Republic established. The opposition party, the Khmer Rouge is infamous and more about them anon.

The monarchy was restored in in 1993.

In the grounds of the palace grow this tree, native only to tropical countries it is known as the cannonball tree after its heavy, dense spherical fruit which you can see here. The flowers are interesting too. They bloom in the morning but die and fall off by the evening. The plant extract is used to treat skin conditions, stomach aches and colds. It has been know to cure maleria, toothache and even mange in dogs. So an all round great tree. It is also special to Buddhists as it is believed that this was the type of tree under which Gautama was born.

Here we have the elephant house. The balconies are so big as this was where the king would mount his beast.

Colour here is also significant in determining the days of the week. Sunday is a red day, Monday is yellow and so on. I guess it makes deciding what to wear in the mornings easy!

There are four Brahma faces on the planes of this spire. Each face represents a virtue

It was surprising how few visitors there were to this palace, especially after the extreme sardine-crush that is the Bangkok royal palace experience. Perhaps the heat kept them away.